18-January-2022
Results of Bogota sports from Monday-17-January.
The Bogota/Ridgefield  Park Scarlet- Bucs  Wrestlers hosted the squad from Lyndhurst/ North Arlington in Speary Gym. Of the 13 Bouts competed the Scarlet -Bucs won eight of them.  Bogota/Ridgefield  Park as ahead for most of the match until Lyndhurst/ North Arlington won three bout in a row to take a 4 point lead.  The home squad  retook the lead with a pair of  decisions.  At the start of the final bout the Scarlet- Bucs had a 31-28 advantage.   A pin-fall , or Major Decision by either squad would give then the victory. In the 285 lbs class  Bogota/Ridgefield Park's Hugo Wang would face Lyndhurst/ North Arlington's Kevin Carranza.
For the first two periods of the bout Mr. Wang would hold a 1-0 lead. This scoreline held until less than a minute was left in regulation time.  Mr. Wang moved his way into a position to record winning Pin Fall and give his team a 37-28 victory. This is the second time in the last three matches  that the contest would go down to the final bout. Both times Hugh Wang has  recorded a Pin Fall to give his team the win.
Derek Bauernschmidt at 106 lbs, Anthony Landi at 120lbs, Derek Rodriguez at 132 lbs, Gabriel Nunez at 150 lbs, Nicholas Buda at 157 lbs,along with Hugo Wang at 285 lbs all recorded  Pin Falls.  While Mathew Carvajal at 215 lbs scored a Major Decision for the Scarlet-Bucs. Lyndhurst/ North Arlington's Eddie Ortiz at 144 lbs and Damian Weaver  at 157 lbs both won by Pin Fall.  Michael Simeone at 165 lbs recorded at Major Decision
The Scarlet-Bucs record is now 9-0. The next compete on Tuesday-18-January against Leonia/ Palisades Park. This will take place in Speary Gym due to the repairs needed to the Gym at Leonia High School.  The first bout is scheduled for 7:00p
The Men's Basketball Bucs hosted the Midland Park Panthers on the Jay Mahoney Court in Speary Gym.  The opening quarter had Bogota  jump out to a 24 to 19 lead. The next eight minutes then saw the teams exchange  three point baskets.  The Panthers would two more scores from close in, which closed the margin to 33-32 in favor of the Bucs.
After the restart the Panthers Defense would close the middle of  floor which caused Bogota to shoot from the outside.  Midland Park took advantage of the lack of successful attempts  and counter attack quickly. When the Panthers pulled ahead it was a lead they would give up. Three Quarter Time saw Midland Park with a 43 to 38 lead. This would allow them to come away with a 56 41 road win.
David Luberoff had the game high with 23 Points. And Russell Pigg with a team high of 3 Three Point Baskets for the Panthers. Bogota's Daniel Trinidad led all scores with 6 Three Point Baskets, and his 18 Points was the High for the Bucs.
Bogota's record is now 2-6. They next play on Wednesday-19-January when the travel to Saddle River Day School. The tip off os scheduled for 5:30p.
Select photos from the Bogota Blog NJ collection of Bogota Sports are now available for purchase.
These may be order from the Bogota Blog NJ Zenfolio store at: Bogotablognj /Sports
(To help support Bogota Blog NJ with its coverage of Local stories & sports
please contribute at: donate to Bogota Blog NJ 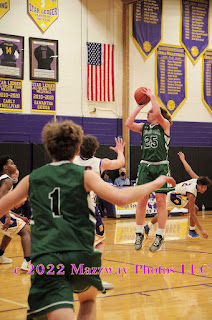 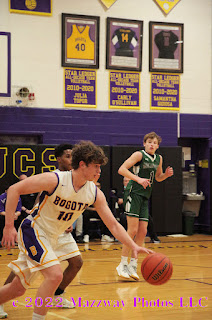 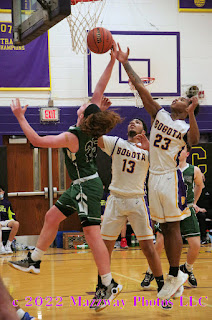 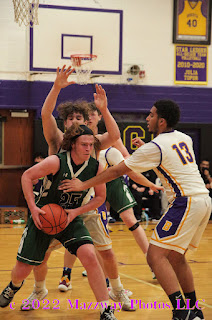 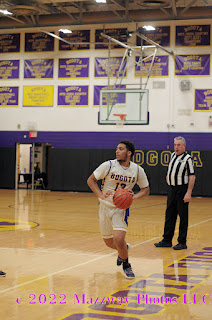 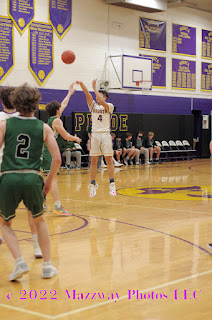 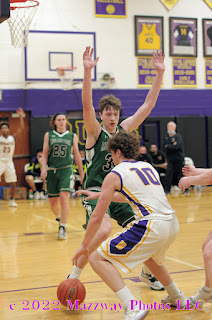 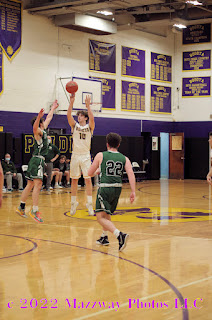 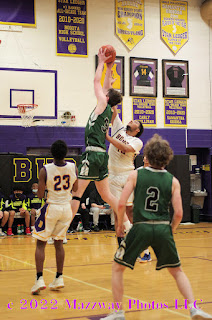 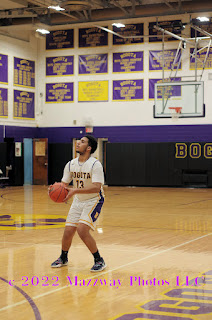 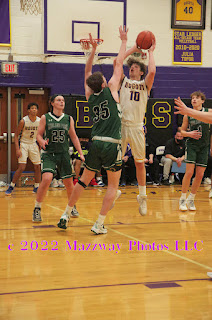 On Sunday-16-January two Bogota/Ridgefield Park Lady Scarlet-Bucs competed in the 2022 Bergen County Women's Wrestling Tournament.
Theresa Zeppetelli won in the 107 lbs class by pining Litzy Argueta from Lakewood, 27 seconds into the first period.
Skyla Ortiz at 145 lbs  would compete in a Semi-final bout. Ms. Ortiz would be pinned by Taylor Peterson of Garfield at 1:26
The Scarlet-Bucs' next match is on Monday-17-January against Lyndhurst/ North Arlington. This will take place at Speary Gym with the first bout is scheduled to start at 3:00p
Select photos from the Bogota Blog NJ collection of Bogota Sports are now available for purchase. These may be order from the Bogota Blog NJ Zenfolio store at: Bogotablognj /Sports
(To help support Bogota Blog NJ with its coverage of Local stories & sports
please contribute at: donate to Bogota Blog NJ
file photos 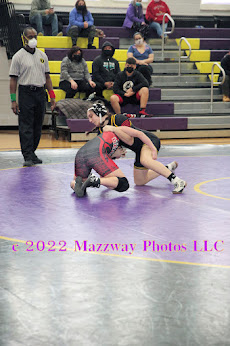 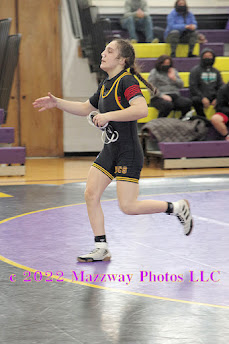 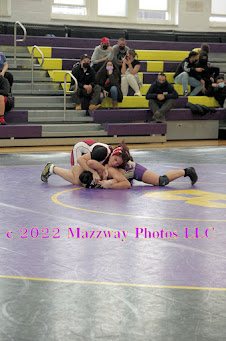 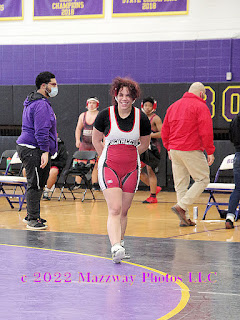 17-January-2022
Due to the coverage of the Winter Storm on Sunday and Monday the events posting for this week was delayed.
Some events happening in and around Bogota and Ridgefield Park for the week starting on Monday-17-January. Please contact the provider for changes and updates. More events will be added as information is confirmed.
( To help support Bogota Blog NJ with it's coverage of Local stories & sports
please contribute at: donate to Bogota Blog NJ)
Continuing
Teaneck, NJ
The organization Never Alone Again Domestic Violence Organization & Resource Center (NAAG)  will host a covid -19 testing site. This will run  every Saturday from 10:30 a to 1:00p. Please Provide ID & Medical Insurance. If you don’t have medical insurance please provide ID.
Their resource centre located at  668 American Legion Dr. Teaneck, NJ.
For more information  on this and other services they provide.  And to volunteer or donate please go to: https://www.neveraloneagain.org/
(it is asked that while attending this event you inform them that you saw it on Bogota Blog NJ) 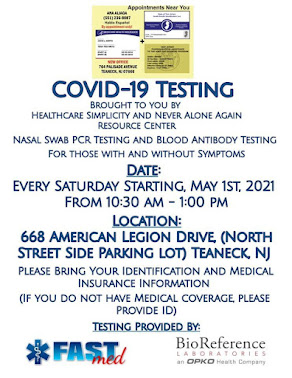 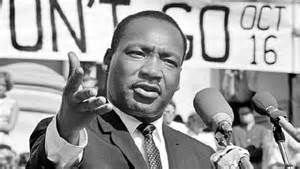 Tuesday-18-January
Ridgefield Park, NJ
The Ridgefield Park Elks lodge #1506 will host a Tuesday Night Dinner.
The dinner will be Pork Loin with Potatoes, Vegetables. Salad, and Dessert is also included. This is a $10.00 donation fee per order. Indoor seating will be available by reservation and pre-order only. Orders will be for in town deliveries only, and must be pre-order. This will start at 6:00p.
For more information please contact Mary Ann Applegate at 201-522-6427
(it is asked that while attending this event you inform them that you saw it on Bogota Blog NJ) 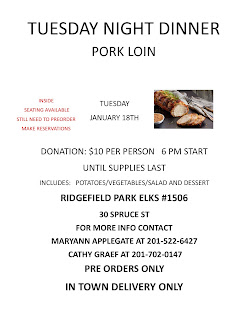 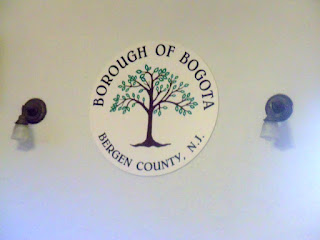 Thursday-20-January
Ridgefield Park, NJ
The Village of Ridgefield Park Board of Commissioners Caucus meeting. This will be a virtual meeting and scheduled to start at 7:00p. The meeting is open to the public. This will be held at the Municipal Building  in the Meeting room. This is located at 234 Main St. Ridgefield Park.
For more information please go to: https://www.ridgefieldpark.org/
(it is asked that while attending this event you inform them that you saw it on Bogota Blog NJ) 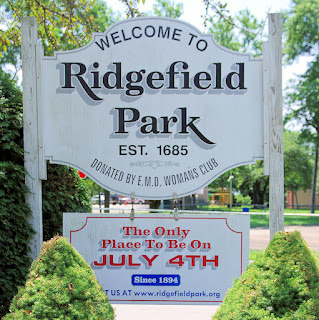 Friday-21-January
Teaneck, NJ
The Womens support group "Never Alone Again" and the Bergen County Food Security Task Force is offering hot meals to go curbside pick-up every Friday starting at 5:00p This will be
held at their resource center located at 668 American Legion Dr. Teaneck, NJ. For more information, please call 201-289-1718 or visit their website at www.neveraloneagain.org
(it is asked that while attending this event you inform them that you saw it on Bogota Blog NJ) 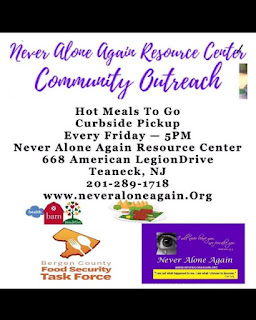 Posted by Bogota Blog NJ at 7:36 AM No comments: