18- July- 2013
Early on Thursday the Cadets of the Bogota Police Emergency Youth Academy were taken to the Bogota Swim Club pool to learn about how to rescue a victim of a water emergency. The Cadets were first taught on how to respect the nature of water itself. This was done by have all the Cadets walk off the high board at the pool. To some Cadet this was just another chance to dive into the pool, on a hot Summer's day. To other it was a bit more of a challenge to walk off into the air above the water.There was also a few Cadets who had to admit they did not know how to swim. Those Cadet were praised, encouraged by the Instructors for wanting to face something new. All Cadets had an option of wearing a life vest, and helmet  to ensure their safety. While some Cadets did not use the extra equipment, those who did were backed up by their fellow Cadets, and were again encouraged by the Instructors , and Life Guards stationed at the end of the pool. All the Cadet made at least one trip to the top of the diving board and into the water. This is a solid way to see one of the goals of the Academy and to help the Cadets help themselves, and push beyond a boundary they may have inside themselves.
Another part of the demonstration was on how to recover a victim that has been found unconscious in the  water. The Cadet were shown how to place the victim on a floating back brace, while still in the water. They learned the techniques of securing the victim from moving around by firmly, and carefully keeping the person head above water during the recuse. While other Cadets moved the back board into place and floated it under the victim. When this was done the Cadets had to secure the person onto the board with straps in the proper place around the body. The final step was to bring the victim to the waters edge and as a team place the person safety on the dry ground to receive further treatment.
The next station was a near-shore, cold water rescue.  For this some Cadets were to swim away from the edge of the pool and wait to be recused. The rescuers had to don cold water suits in order to be able to reach the victim in colder conditions.  Cadets had to work in teams to assist the Rescuer  in getting into a thick rubber suit in the quickest time possible.  The Cadets were then given a buoy and needed to walk towards their victim. When close enough to the person in the water the buoy was then thrown to the victim so they could hold on to the buoy, while the Cadet walked back to shore were the victim could then be taken care of.
The Cadets then had one of the first competitions of the Academy as Alpha & Bravo Squads faced off against Charlie & Delta Squads in a swim relay. After the racing it, appeared to the Instructors that the Cadet had some free time on their hands,  so there was a series of  exercises of the Cadets going in and out of the water as fast , and safety as possible. There was also time for some in water calisthenics for the Cadets. The Instructors seem to think that the more splashing the Cadets, together, the better they were doing.  Then the Cadet had to fall into formation and proceed to the softball field to learn about various rescue equipment.
The next part of the story will be in tomorrows post. 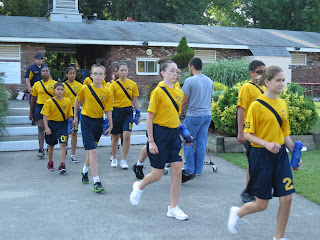 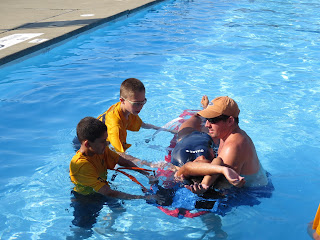 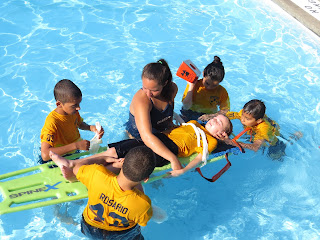 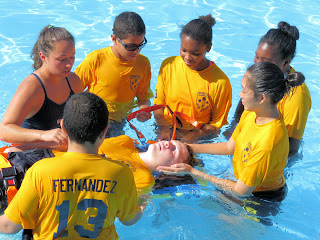 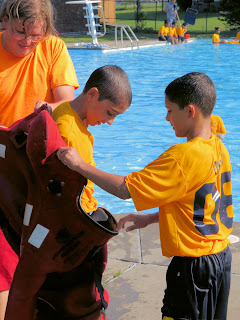 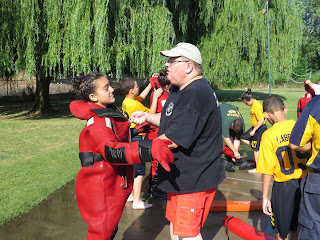 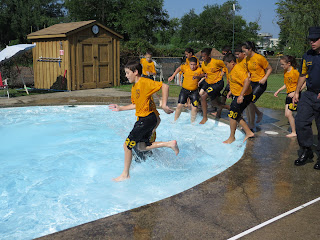