19- July-2013
After the Cadets of the Bogota Police Emergency  Services Youth Academy completed their water training they left the Bogota Swim Club pool and quick marched to the softball fields on the eastern side of Olsen Park. Waiting for the Cadet was a number of emergency vehicles from around the county. Before they were given the opportunity to learn about these units the Cadet had a chance to watch the landings of two rescue Helicopters on to the field in front of them. The First to arrive was the Air One unit from the Hackensack University Medical Center.  Shortly after that one of the rescue Helicopters from the New Jesey State Police landed in the other part of the field.  Not only were the Cadet  able to watch the landing , but the Day Campers of the Rec Camp had an added treat to their day.  Once the Helicopters were secure the Cadets formed into their Squads and started to be given tours of the different types of Emergency vehicles. The Cadet learn that the Helicopter are used as a flying ambulance when speed, and distance  are in play. There are only a few State Trauma Centers in New Jersey. One being in Hackensack, while some others are in Jersey City & Newark. It was explained to the Cadets that not every accident needs aerial transportation, but in some cases local Hospitals are  not equipped to handle those injuries, or the person condition  is that that minutes will be a factor in how a person can be saved from their injuries.
The Cadet also had a chance to see inside an average ambulance to see the equipment available to help a person at the scene of an accident and how that person can still be under medical care while being transported to the Hospital for more care.  Other vehicles on display are of a more specialised nature. One  was a bus size unit that is used in a mass care situation. Almost a Hospital on wheels that can be move closer to an area need in a emergency. These would have be used in past incidents such as Hurricane Sandy were some Hospitals needed help with the number of cases they would see. Or in the event of a large accident , or other situations with a large number of casualties.  A  medical SWAT team  explained to the Cadets that there would called to aide the Police Dept. when a Special  Event was in progress. They had the Cadet look at , and try on, the bullet proof vest, helmets & gas mask they use when they are called. The same equipment the Police SWAT teams have , but instead of guns they have their medical equipment to help if an Officer, or other First Responders need help. A different type of equipment the Cadets were shown was the Robot that the Bergen County Police use in case of a suspected bomb, or other explosive device. The Robot is also used incase there is a chance that the air has been found to be a hazard to Human, or animal, life. The Robot would be driven  into an area by remote control  in or to keep the rescuers themselves out of harms way.
Before the Helicopters needed to leave the entire Cadet Class #3 along with the Instructors, the Air Crews, and officials from the Bogota  Dept of Emergency Management had a chance to pose for a class photo in front of the Helicopters.
The Graduation Ceremonies for the Bogota Police  Emergency Services Youth Academy Class # 03 will be held on Tuesday 23- July in the Steen School Gymnasium located off of the 300 block Orchard Terrace. The ceremonies are scheduled to start at 7:00p. The Public is invited to attend. 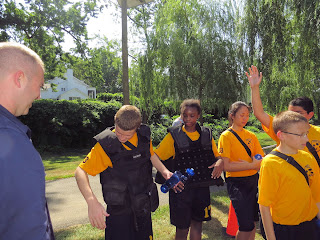 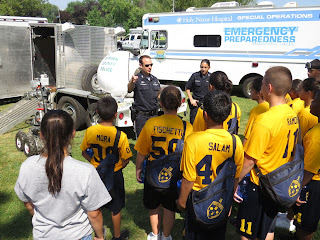