As another school years has past a few items about the schools, and students of the Bogota Public Schools. This blog has chronicled the athletic achievements of the sports team from Bogota,  another part of the story is the hard work these young women & men put in during class time. In an 19- April article in the Bogota Bulletin ( Bogota Bulletin story)  tells the story of how  Bixby school scored  high in academic achievement not only among the other schools in the Borough, but to similar size schools in the neighboring towns.  Both Steen , and Bixby school higher then the state avg. in the JerseyCAN  rankings. The Middle section of Bogota schools also scored higher then the state avg. The only school to do less than the state avg. was the High School section. It ranked lower several points lower then the state avg. However, it was almost five full point higher in it's graduation rate at 91.7 % of the student graduating High School.
The Bogota High School was also ranked nationally in the recent Newsweek poll of top public High Schools in the Country. To start with, Newsweek ask 5,000 school in the United States to join in the survey. Out of those only 2,500 responded to the poll,  when the top 2,000  were announced. Bogota came in at number 1,361 out of schools in the nation. Within the state of New Jersey there are 392 public High Schools, Bogota came in at number 84. And in Bergen County alone Bogota placed 17 of the 47 other public High Schools in the County.  ( Not all the schools in New Jersey took part in the Newsweek Survey) But the Bogota School district was confident in their students ability to have them  go up against some of the largest districts in the state & nation.
Just another example of what a small town in Northern New Jersey  can be proud of. 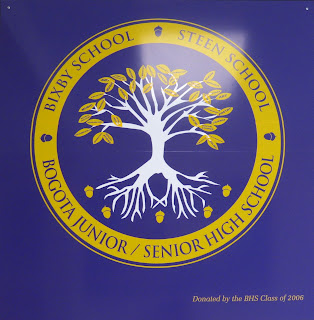