29-May-2012
Earlier Monday morning the Bogota post of the Veterans of Foreign Wars, Ralph Hall  post #5561, and the American Legion, Clifford Dunn post #117 held their Memorial Day service in front of the Bogota Borough Hall.  With the traditional remembrance of fall members of the Bogota Fire Dept. preceding it. This year, for the first time, Walter Croft of the American Legion sent out an invitation to the Navy to see if there would be any service  personnel  from Fleet Week that would be interested in joining the ceremonies.  The response was that over 40 men & women on active duty can out to Bogota to help honour all members of the worlds armed forces, past and present, to give of themselves to help others.
The United States Marine Corp. was represented by the men of Charlie Company 1st Battalion 9th Marine. The U.S. Navy had ten sailors from USS Roosevelt attending. Finally  in recognition of the allied forces Fourth year Cadets from the Spanish training vessel  Juan Sebastian De Elcano.
The ceremonies began with Lynn Teale leading the crowd in singing the Star Spangled Banner. VFW Commander Hernandez then lead the crowd in reciting the Pledge of Allegiance. Pastor Peter Olsen ,of Trinity Lutheran presented the Invocation, before Commander Hernandez welcome the crowd, and the guest to Bogota. Mayor Pat McHale spoke in also welcoming those had chosen to attend. Next can the reading of the Honour Roll for those members who are now "absent". With the help of Emily Sinclair for the American Legion, and Lillian Stevenson from the VFW, poppies were place on a cross in front of the World War I Monument in tribute to fallen members who have served the country.  The final tribute was the laying of a wreath at the monument for MIA / POW's.  This was done by Kathy Fry from the American Legion women's auxiliary. She was escorted by a Marine Color Guard consisting Kevin Brakhage  & Donald Brackin II from Charlie Company. This was accompanied by  Mike Sorrention playing Amazing Grace on his Bag pipes. Father Richard Supple of St. Joseph's gave the Benediction, and lead the crowd in singing America the Beautiful.
American Legion Commander Croft ended the ceremonies by thanking all who came to attend , and a special  thanks to the Men & Women from Fleet Week who had come to New Jersey to attend. The crowd then gave those service personnel there own round of applause. Before, and after, the ceremony many of the citizens of Bogota gave a personal thanks to the service  Men & Women, as well as welcoming to the Borough. 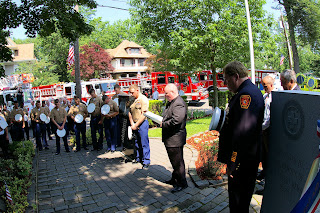