3-Aug.-2013
On a rainy Saturday morning the Bogota Green Team, along with the Bogota Environmental Commission  & the Bergen County Utility Authority hosted a paper shredding event in the parking lot of the Bogota Recreation Center. A fully enclosed 24 foot truck was brought in to dispose of the material.  The truck had it own shredder with in the body of the truck so taht no material would be able to escape, or be left behind.   The back door was also pad locked only to be open at the next step of the process.  Hamilton Fernandez of  Nex-Cut and some student volunteers assisted those who came to  dispose of their documents. Items were place in a single container, which was then taken to the side of the truck. The container was then lifted into the truck, tip to empty into a shredder as the container was empty. A small screen at the control panel show the shredding process taking place. Mr. Fernandez allowed the person to look at the screen so they could see what was taking place. In addition  Mr. Fernandez would show anyone who asked that the container that into the truck was now empty. Something a few items were left in the container which were then taken out by hand and placed in the truck to be shredded. The container was always fully empty before being use for more material.
Mr. Fernandez said that he would then take the truck to the next step of the process in which the shredded paper be processed into a fine dust , or powder  so it could then be recycled into various paper product such as plates , or napkins. Mr. Fernandez estimated that this event had collect about 3,000 pounds of waste.  So not only have personal documents have been deposed of safely, but a ton & a half of refused can now be put to a new use. 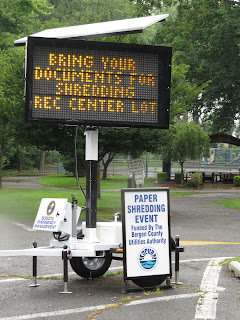 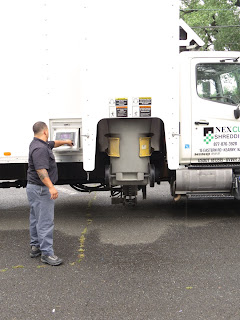