9-Aug.-2013
Over the last several  weeks the gym at Steen School has hosted a basketball camp for the students who live in Bogota. It is run by Bogota Men's basketball Head Coach Jay Mahoney along with his Daughter Brianne. The Senior Mahoney take the older players and tries to fine tune their skills, along with some lessons about the history of the game. Among players he is teaching are the young Women & Men who represent the future generation of Bogota Basketball. In some cases the next generation of players whose Father were coached by Mr. Mahoney. In the Afternoon session of the camp, current  and former players are working with Coach Mahoney to improve the parts of their game that needs it. On his side of the Gym is the familiar booming voice of Coach Mahoney  trying to get the players to work as a team. Also pushing the players to be better them they think they are, while focusing on how to play winning basketball. Towards the end of the session the players are put into teams and have a quick game. The games are played to 15 scoring by 2's so some of the baskets need to be made by long range shooting.  Coach Mahoney stands by keeping score , and ready to call fouls when the players feel like a infraction has been done. This give the players the chance to play through contact knowing that in league game not everything called, and a player should rely on his teammates & themselves to produce points.
On the other side of the Gym Brianne Mahoney takes the younger Girls & Boys and starts to teach the basics of the game. Passing drill, time spent dribble the ball, including changing hands, and lots of shooting. She also has the students playing some games at the end to put in practice what they have learned. She has two scoresheets for these players. One is the points made during the game, as well as, how many shot each player on a team takes. If all the players do not take a minimum numbers of shots, then the team with the most points may not win. This gets each team to use all their players, and work together in order to win.
Afterwards the players can stay around just shooting some baskets with their friends. If allowed some would stay all day, but they do need to leave so others can use the Gym. 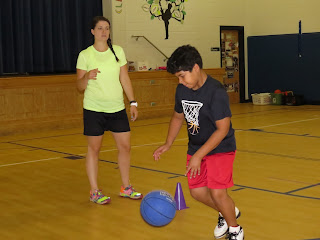 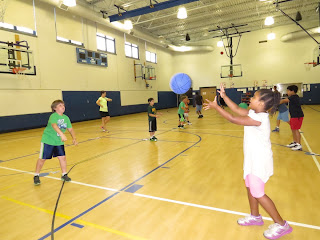 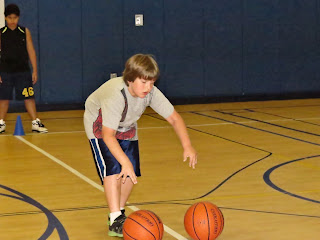 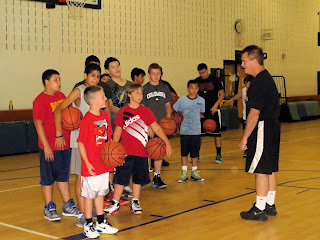 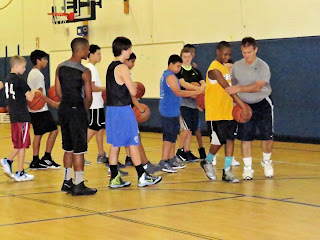 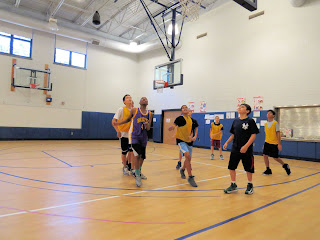 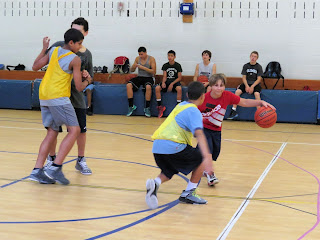