15-Aug.-2013
The American Cancer Society held it's Kick-off  breakfast for the Making Strides walk Against Breast Cancer walk walk in Overpeck Park on Sunday  20- August-2013. Kristina Thomson of the American Cancer Society talked to the attendees about the the progress the ACS has helped make in the 100 years that it has been in existence. She said much of the progress in the finding a cure for cancer has come with the help of events like these in which families, friends,  and survivors themselves have gotten together and formed teams of individuals to raise money as pledges for the walkers in events like Making Strides. Ms. Thomson that one person getting a few friends, and co-workers together to have a bake sale could then move others to do the same, and pool their money  for a bigger donation. Another was a Parent talking to her daughter about what she could do at school with her friend by  forming a team to walk then having a car-wash that raises money for that team to use as pledges in their walk.
Ms. Thomson also mention that some of the money raised go for thing other then just research. The ACS helps with some day to day efforts a patient may need.  Transportation to, and from medical appointments when needed. Another program offered to have a guide for patients to help deal with the experience of the Medical System. This is someone who will help the patient on what is available to them, what can be expected during their treatment. The ACS also has a number of lodgings that  are free to patients , and their caregiver if the Medical Facilities are too far from the patients home. And even providing wigs and other beauty products for those suffering for the effects of chemotherapy.
13 year survivor Joan Van Soest talked about how she used the  American Cancer Society for help as she went through treatment. She talked about not only being a team leader to help others, but to give her a caused to work for so she did not feel that she was a victim. It caused her to worked to survive for not only her , and her family, but to help others and their families become survivors as well. Another Pacesetter team leader was Diane Kappes who could not sit by while her mother had to go through treatment for her cancer. Ms. Kappes talked about how she thought it would be impossible to raise the $100 as a first time goal. When $500 was raised the first year she did not know if she could double that. When the second year goal was passed , and tripled she just kept hoping that maybe a little more could be raised. Then suddenly she had become a Pacesetter and was raising over $2500.
Kristina Thomson said after these story that are inspiring , but small $10 & $20 are just as important to help find a cure for cancer. So she is hoping that anyone who would like to join by forming a team , or acting as an individual sign up to be apart of the Making Strides Walk for Ridgefield Park by going to makingstrideswalk.org/ridgefieldpark   The walk will be a 5K walk in theRidgefield Park area of Overpeck Park  located at 199 Challenger Rd. Ridgefield Park , NJ . It will be on Sunday 20 -October 2013 registration will open at 8:30a with the walk starting at 10:00a  Music, and other entertainment will take place at the Bandshell which will to the starting line for the walk. Tents will have information about products , and services to help patients going through treatment. There will also rest area for walkers, along with massage area to help before, and after the walk. 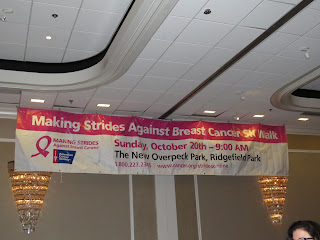 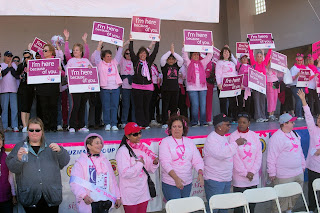 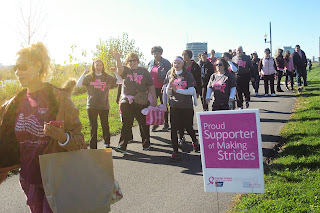 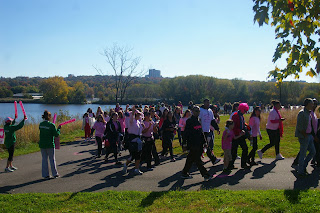