On Saturday 14- November the Borough of Bogota, in conjunction with the Bogota Police department will the Street in front of the Police headquarters  in honour of former police Chief Henry J Smith.  This will take place at Bogota Borough Hall starting at 1:00p
Chief Smith served 38 years on the Bogtoa Police force. He first came on the job in 1956 After serving in the navy during World War II. He was promoted to Chief in 1982 and served in that post until his retirement in 1988. Chief Smith passed away in 2013.
Recently retired Bogota Police Chief wrote of Chief Smith:

Henry J. Smith was a service minded individual who lead by example and encouraged others to follow suit.  He served his country in the United States Navy and upon his return he served his community as a law enforcement officer until his retirement 1988.  He continued serving his community through his efforts in building and maintaining the cobblestone walkway that we enjoy in front of Bogota Borough Hall, volunteering at Englewood Hospital and as a member of the Bergen County Police Chiefs Association and their charity works for those in need such as our veterans and patients at local hospitals.  Throughout his life he assisted in maintaining the boiler/physical plant of St. Joseph’s Church.  He was active in all the listed above until his passing in 2013   He was one of the few individuals who lived and served his entire life in the Borough of Bogota.  He instilled in his family the ideals of service not only to the local community but our nation. His way of life continued through each of his family members in which his children have either served in our armed forces or have been active in volunteer emergency services.  His widow, Dorothy, continues to volunteer at Holy Name Hospital and St. Joseph’s Church.  He exemplified what we should all aspire to be as family men and leaders in our community and beyond.  He never forgot where he came from and continued his weekly visits to check in on the officers of the Bogota Police Department and a cup of coffee but his “tell it like it is” insights.  I never had the opportunity to work for “Smitty” as he came to be known to those close to him but I wish I would have.  He and his family certainly were an influence in my life and I am sure others who have had the opportunity to meet him and his family.  Individuals like Henry J. Smith and his family are what has made Bogota a special place for many years.  We need to ensure that these ideals are not forgotten so that Bogota may continue to be that special place we have all known. 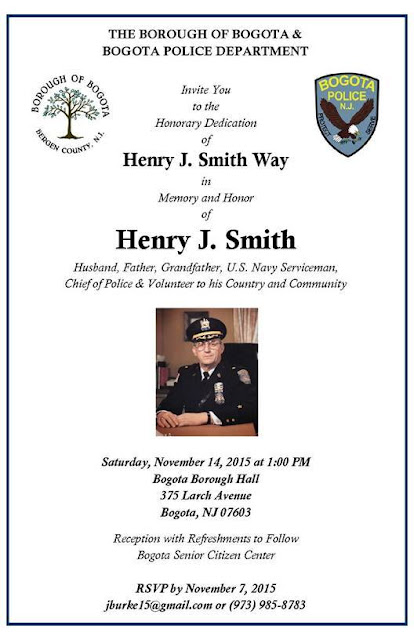 ( To help  support Bogota Blog NJ with it's coverage of Local news & sports please contribute what you can by using the  donation button  at the top right of the page.)
Posted by Bogota Blog NJ at 10:30 AM