1-March-2020
Results from the weekend for the teams from Bogota. The Bogota-Ridgefield Park Scarlet/ Bucs  Wrestling team will sent two wrestlers to the New Jersey State Interscholastic Athletic  Association State Wrestling finals. Adam Albino at 106 lbs and Andre Ruiz at 126 lbs both advanced from the Regional #2 tournament on Saturday.  Adam Albino would lose his Semifinal bout to Dominic Tafuri of Cedar Grove by a 2-5 Decision.  This would place Mr. Albino into the consolation bracket. He would beat Jack Bastarrika from Mt Olive by a 9-6  decision. This result guaranteed him at least a fourth place finish and a spot in the state finals tournament. Mr. Albino would be forced to withdraw from the Third Place bout , against Aiden Wallace of Bergen Catholic,  due to injury.
Andre Ruiz would lose his Semifinal bout to Logan Mazzeo  by a 6-7 Decision. Mr. Ruiz would also compete in the consolation bracket. Mr. Ruiz would win the semifinal bout 15-8 over Joseph Cappello of Paramus Catholic.  Andre Ruiz  qualify for the state finals  and would then win the Third Place final bout 9-4 over Joe Fongaro of Boonton.
The  New Jersey State Interscholastic Athletic  Association State Wrestling finals will take place in Atlantic City starting on Thursday-5 March. The opening round is scheduled to start at 12:00 noon.  Seeding and bracket will be available at a later date. 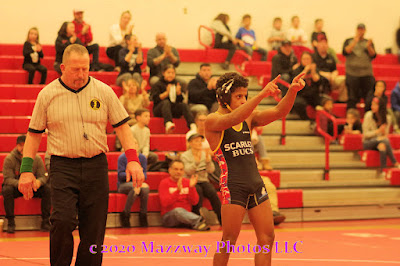 The Bogota Girls Middle School Basketball Lady Bucs won the Maywood Tournament on Friday-28-February. They defeated Maywood by a score of 49-34.