On Tuesday 28-July the  Bogota Police Emergency Services Youth Academy held their  graduation ceremonies for Class 05. This was held at the Gymnasium of Steen school in front of Family and Friends of the 57 Cadets who attended this Summers youth academy. This was the largest class in the five years of   the  Bogota Police Emergency Services Youth Academy.  This also mark the final graduation for Bogota Police John Burke.  Chief Burke will be retiring in August  and was responsible for the forming of the Youth Academy. He envision a program taht would help the Students of the Borough would have a chance to get a sampling of what it would be like to be apart of one of the various  Emergency Service of Bogota. He talked of how pleased and proud of what the Academy has become and is waiting for the day that Graduated Cadets join one of these services. Chief Burke took a personal moment to honour photographer Ed Rode for supplying photos for the Academy, but also chronicling life around Bogota with his photos.
Next Director Sgt Lynch  thanked Chief Burke for his support of the program and wished him well on his retirement.  Sgt Lynch then introduced the members of his staff of Instructors who have trained and molded the Cadets starting with Class 01 to today. He also acknowledged the members of the intern program who acted as the support system to help with the running of the Academy. Most of the intern are Academy graduates, which Sgt Lynch says is one of the strengths of the Academy, that Academy Alumni return to help future Classes succeed.
Coordinator  Anna Ferris was next to speak.  "Miss Anna" to the Cadets openly admitted that she is the one member the staff without a Military background and would not promise she could stay stoic while talking about her Children. She started off by introducing Mayor Keleman and other members of Borough Council, along with Capt Sepp of the Police, Chief Brophy of the Fire Dept and Chief Cordero of the First Aid Squad. She then thanked  those who had proved specialised training class for the Cadets.  Then it was time for the Cadets to receive their Certificate of Completion personally from Sgt Lynch.
Next came some Squad and group awards followed by the main awards. The first was the Performance Award. This is given to the Cadet who had performed on a higher level than other Cadet in a variety of different exercises. This year winner was Ivelisse Vargas.  The next award is new with Class 05 is the Director's Award given the Cadet who overcame obstacles while being a Cadet at the Academy. The first time winner was Jaylan Abuzid. While his twin Brother Joshua was a Graduate of Class 04, Jaylan wanted his chance to be apart of the Academy. This was complicated by a physical handicap to Jaylan.  Sgt. Lynch and Miss Anna formulated a plan to make this possible. The plan was to bring  Jaylan on as a Cadet for Class 05. While some activities  were modified Cadet Abuzid still performed as another Cadet. This included jumping off the High Board at the water rescue training, white water rafting for survival training, and being in the sand, water, and hosed down on " Black Friday" Sgt Lynch would use the term  "special needs" to describe what Cadet Abuzid did for the Academy. Because  Cadet Abuzid helped move the Academy to a new level.  Then  there was special  ceremony  as for the fourth time a Cadet had graduated from their third, and maximum, Class.  Cadet # 17 Elana Lane  had her number retired joining the three previous numbers; # 18 Garcia  # 33 McDonell & #35 Pulido . Cadet Lane was presented with a frame copy of her jersey by Graduate Garcia & Miss Anna.
Finally the award for Honor Graduate was announced.Starting with Co- second runner ups of Rebecca Sanz & Andrew Sepp. First runner up was Carmen Cruz with the Class 05 Honor Graduate announced, by the first  four Honor Graduates, is Jordan Lavalle. After Cadet Lavalle accepted her award with her parents by her side, she returned to the stage so that Instrutor Perez could give the anticipated order of  CLASS 05....DISMISSED!
With that the Cadet proceeded off the stage to watch a short film by Rey Sanchez about their time as member of Class 05, then went on to join their Family to celebrate. 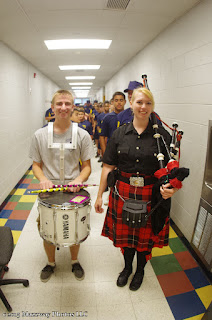 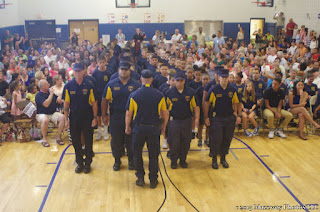 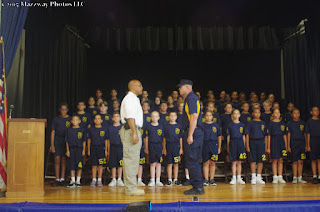 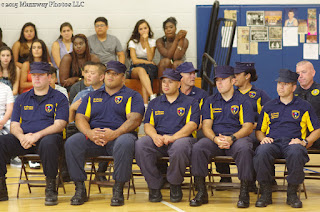 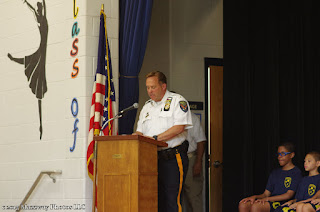 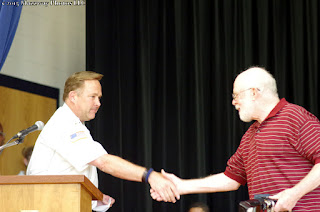 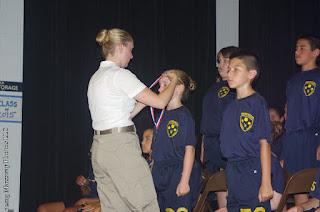 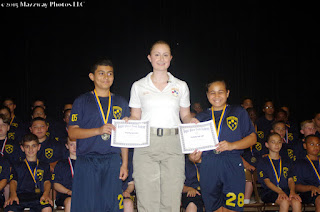 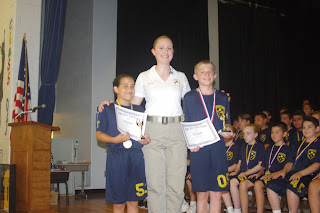 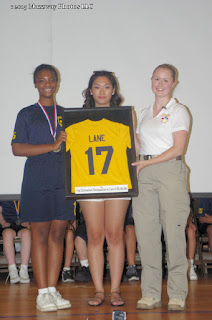 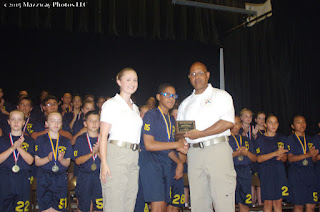 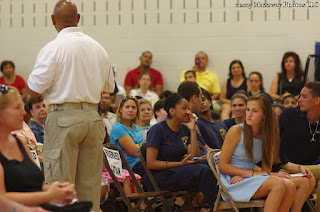 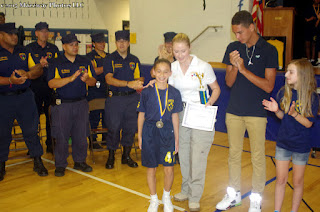 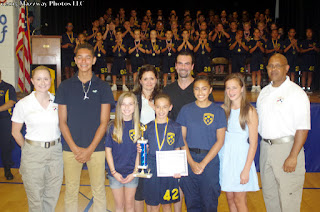 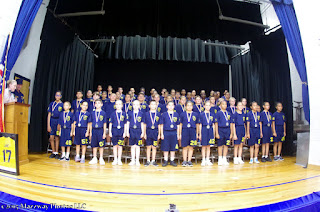 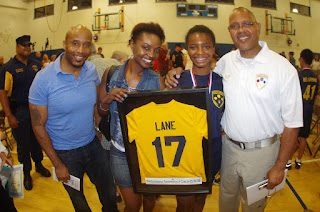 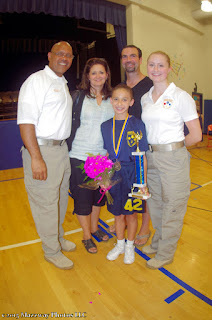 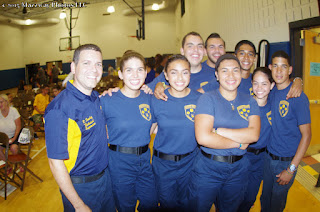