Some long  term campaigns that will take place in the month of April.
The Bogota Police Dept. will engage in a Distracted Driving Enforcement and Education Campaign starting on Sunday 1-April. This is part  of a National and State wide effort to reduce the number of traffic accents caused by distracted driving. This is titled UDrive. UText. UPay and will continue in Bogota until Saturday-21-April. The alert from the Police is as follows:
Law enforcement officers from the Bogota Police Department will be cracking down on distracted drivers during April as part of New Jersey's UDrive. UText. UPay. enforcement campaign.Beginning April 1 and running through April 21, the high visibility law enforcement initiative will target motorists who engage in dangerous distracted driving behaviors such as talking on hand-held cell phones and sending text messages while driving. "Distracted driving is possibly the most serious safety issue on our roadways today," said Gary Poedubicky, Acting Director of the New Jersey Division of Highway Traffic Safety. "The National Highway Traffic Safety Administration reports that in 2015 alone, 3,477 people were killed in distracted driving crashes and an estimated 391,000 people were injured in motor vehicle crashes involving a distracted driver." In New Jersey, driver inattention was listed as a contributing circumstance in 52 percent of the state's crashes in 2015. Driver inattention was in fact listed as a contributing factor in crashes at a rate nine times higher than that of the next highest contributing factor (speed). The campaign is being carried out during the month of April, which the National Safety Council has designated as Distracted Driving Awareness Month. The New Jersey campaign is modeled after similar successful high visibility enforcement programs such as Click It or Ticket and Drive Sober or Get Pulled Over.​
The types of violations will include: Texting, using a cell phone or smartphone, eating and drinking, grooming, talking to passengers, Reading, including maps,Using a navigation system,Watching a video,Adjusting a radio, CD player, or MP3 player. 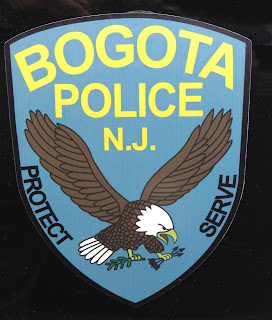 Another month long event for April is the Bogota Library's "Food for Fines" This allows  the payment of any late fees to be paid with food donations. This will begin on Sunday-1-April and last all month until Monday-30-April. The library will be accepting donations of non-perishable foods in place of overdue fines from their patrons. One item will pay up to $1.00 in fines. Items that are most needed are: canned meats, fish, vegetables, fruit, soups, beans, peanut butter, jelly, pasta, sauce, boxed rice, pancake syrup, hot and cold cereals, cake mixes, juices, and icing. They appreciate your generosity during this food raising event. All food will be brought to Bogota’s St. Joseph’s Food Pantry.
If you do not have any over due items from the Library they will gladly accept  any food donations during April as well.  The Bogota Public Library is located at  375 Larch Ave. Bogota, NJ. For more information on this , and to see all the other Library programs for the month of April please go to their web site at www.bogotapubliclibrary.org  or call 201-488-7185 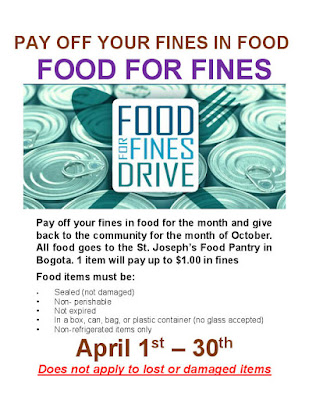 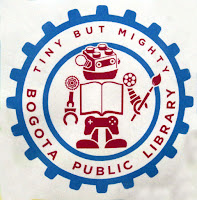