18-June-2021
On Thursday-17-June the Lillian M. Steen School in Bogota held their Sixth Grade Graduation Ceremony for the Class of 2021. A replay of this event can be found on the Bogota School District You Tube page at: https://www.youtube.com/watch?v=ROD6Jgg-rdA
This will be the final Sixth Grade Class graduating from Steen School. They also represent the  inaugural Seventh grade class of the new Bogota Middle School starting in the all of 2021.
The Steen Principal Dr. Dayle Collins welcome those who attended the program. of the ceremony. He introduced Ms. Isabella Cintron  who lead the audience in the pledge of Allegiance and the National Anthem.
In her address Principal Collins praised the Staff, Parents,  and most importantly the Students for the continuing work they needed to over come the current situation. She talked about the Graduates experience this year at Steen School was the ground work for then to build on. Needing to overcome the challenges of the last year and half of having to change what it meant to be “ In-School”. Principal Collins hope that the same growth they shown this year will allow them to meet different challenges of Middle School, then High School and beyond. Principal Collins asked the Student to keep dreaming big, while being the best version of themselves in the process.
The next speaker was Bogota School District Superintendent Mr. Damian Kennedy. He first mentioned about being happy that Family, Friends, and the Students could share this moment together again.   Next he told the graduates that while this may be a first step in their lives, the education they received at Steen was a solid foundation to build on. The Student need to keep looking for new experiences and ideas in their future.  Even if there a failures ahead they must big strong enough to learn from in order to achieve their goals. Few things worth while will come easy. But with the support and respect of your Parents, Friends Classmate and Teachers anything can be achieved. He finished by quoting Dr. Seuss, “ Remember you are, Braver than you believe, Stronger then you seem, Smarter then you think, and Twice as Beautiful as you imagined.’
Then Ms Alexis Barbee  spoke on how a key to her success, and that of her Classmates, is due to the support, caring, guidance, and sometime unwanted pushing, of her Parents to help the Student meet and surpass the challenged they face.  To show their appreciation each Student then delivers a rose to their family in the Audience.  Next Ms. Liah Bernabel  addressed the address to the Class of 2021.
The announcement of the individual awards and certificates to the members of the sixth grade class. First Principal Collins then announced a special honour to one of the Steen Parent.  This was a Parent who over the past 7 years served on the Steen PTO and helped with fundraising and events that benefited all the Students at Steen. Ms. Stacy Fowler was given  gift and a Bouquet in recognition of all her work. Other awards announced were for:  Creative Arts, Sportspersonship Award, The American Legion Award, Leadership Awards, the PTO Awards,  The Principal Caring Award, Presidential Awards for Academic Excellence and Academic achievement, The VFW Highest Grade Point Averages.
After all the Student awards were announced Principal Collins acknowledged Teacher Ms. Cindy Piano on her retirement after 22 years of teaching in Bogota.  This was followed by a video tribute to the Sixth Grade Class of 2021 by the Teachers. They congratulated the Students on their achievements and wished them success in the future.
Finally Principal Collins presented the Certificates of Promotions to the graduating Class of 2021. 52 Students  will graduate this year, and all but 4 were in attendees The names of those graduates who participating online were also announced  first so that can also be recognized.
When the final certificates were presented, and the new Alumni of Steen School accepted the applause from those gathered. The last act the Steen Class of 2021 did together was to face their family and launch a confetti shower in their direction for a grand farewell.
( To help  support Bogota Blog NJ with it's coverage of Local stories & sports
please contribute  at: donate to Bogota Blog NJ ) 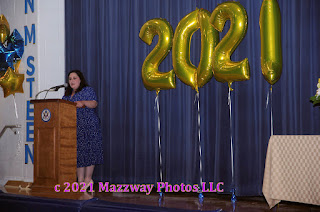 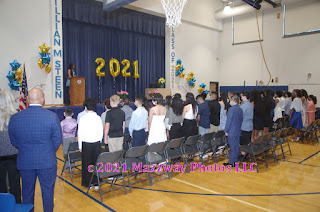 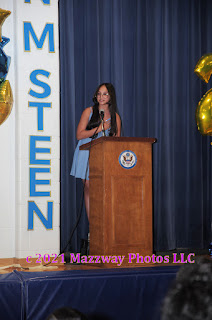 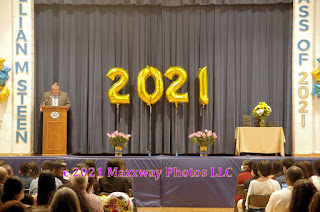 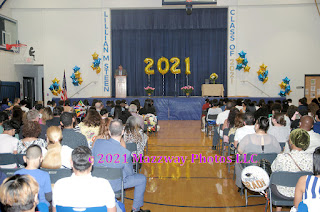 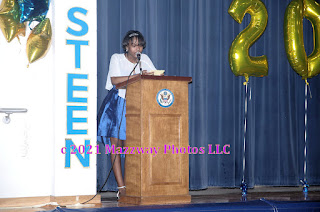 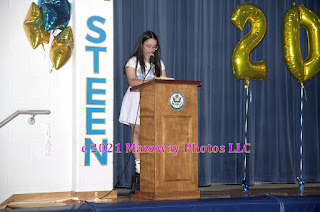 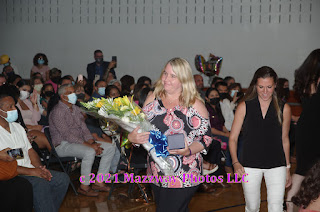 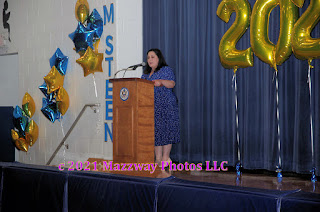 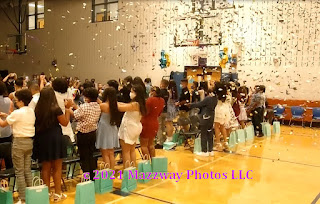