11-Oct-2013
On Monday 7-Oct the Bogota Fire Dept. saw the return of it's Hook & Ladder Truck #1. It had been sent away to have a complete overhaul from the wheels up. The first thing that is noticeable is that it is now a red fire truck instead of the white it was coloured before. Members wanted it to match the other trucks in the dept. The engine is still original, just  tuned-up and clean along with the front bell. From there on many upgrades and improvements have been made. Simple ones like doors to the compartments that holds the equipment that can be used on call now slide out of the way to allow for faster, and easier access.  To other systems like the hydraulics have been replace to allow for a quicker, and smoother operation of it's ladder. The Ladder now extends to a maximum height of 150 feet and can be deployed at a 90 degree angle. The cab has had it's electronic updated along with the installation of a rear view camera to assist the driver in backing the truck to tight spaces. There  are also more, and stronger lights  some to warn drivers of it's approach when answering a call, others to help illuminate  the scene in order to get a clearer view of the situation at night , or in heavy smoke. One lighting system is a string of blue LED lights on both sides of the ladder. What might appear as cosmedics will now help guide the firefighters, along with someone who may need to evacuated from higher elevations down the ladder  in times when visibility may be hampered.
The original rig was purchased by Bogota in 1993 and was starting to get near the end of it's duty cycle. When researching the cost of buying new equipment is was discovered at getting the current model refurbish would cost the Borough 1/3 of the price. The refurbish rig has costed Bogota  $371,000 where a new ladder truck would have been $990.000 to over one million dollars. The current rig now has a duty cycle for another 15-20 years to serve, and protect the citizens of Bogota.
On Thursday night the new Ladder #1 was blessed by Father Richard  Supple in a brief ceremony at the W. Broad St. Firehouse. Borough officials to see how the taxpayers money has been spent, and  were pleased with the out come, and the savings of reusing equipment already owned by Bogota. Members of the Ridgefield Park Fire Dept. also came by to help celebrate with their follow firefighters, and to toast the upgraded rig.
The Bogota Fire Dept.  along with the Rescue and First aid Squads are all volunteer organizations.  For more information about volunteering please to to bogotafire.org/  or call; 201-342-1736 ext. 2007. 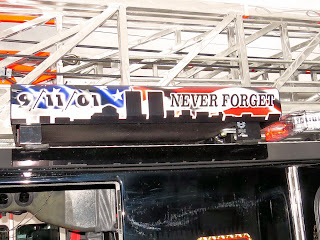 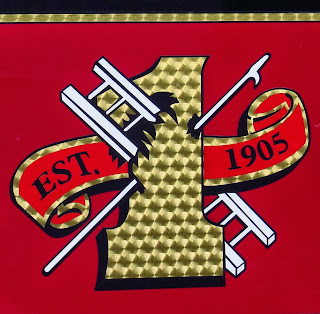