A group of citizens gathered at the Dewey School site on Palisade  Ave to express their concerns about the Pilot tax abatement on the development of that site. In attendance were Bogota Councilmen  Evaristo Burdiez Jr. and Jorge Nunez, also there were the two Republican candidates for Borough Council Chris Keleman and John Mitchell. The rally is to highlight the fact that the PILOT agreement does not provide money to the Board of Education as the standard property would include.
A PILOT program is sometime use to allow a municipality to collect revenues from non-profit  organizations such as educational, or medical  institutions. It has also been use to help spur commercial development. One of the larger PILOT agreements is the one between the Port Authority of New York and New Jersey and the City of New York over the World Trade Center. This agreement was made pre-9/11 and the PA has a different level of payment since then.
In the agreement pass by the Bogota Council give the developers 297 Palisade Ave urban Renewal LLC  a 30 year tax abatement for 30 years. In the first ten year the Borough is scheduled to receive 10% of the occupied rent from the apartments when all units are rented. It increases to 11-14 % for the next 10 years then 15% for the final ten years. Borough official estimate a total of $3.3 million for the life of the agreement. Under normal property taxes bill the Borough estimated total for the same time frame would about $2.3 million at the current tax rate. During the 30 year agreement the developer could not ask, or sue, for a reassessment. Under the PILOT agreement the Borough would 95% of the funds.
One point of the rally was that no money is set to be used for the school district of Bogota. They noted that most of the apartment are to be two bedroom units where it is possible for parents of school age children to move into the Borough. They also voice concerns about the effect of a 44 unit structure could have on  street maintenance as well as the sewer system in that area. Another concern that was stated was the auditor for the Borough & the Board of Education are the same person and did he do a proper job representing the school board during the negotiations. Another point raised was an absence of cost impact information, and on whether there is a conflict of interest between current Borough Administrator August Greiner and the developer company attorney Paul Kaufman. Mr. Greiner served as Police Chief in Leonia when Mr. Kaufman was Mayor there. Mr. Greiner has said he was present at the negotiations, but did not participate.
The group plans to have a second day of the rally tomorrow also from 4:00p to 7:00p at the same location at  297 Palisade Ave . 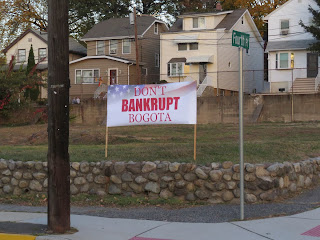