The Bogota wrestling Bucs had a 58-15 victory over Secaucus on Wednesday 3- February.  Michael Martinez at 113 lbs scored a Major Decision, Brandon Gonzalez  at 120 lbs, Boula Takla at   132 lbs Jevon Stephenson at 160 lbs,  Justin Demoya at 195 lbs, and  Evan Schroer at 285 lbs all scored Pin Falls. Bogota record is now 9-6
Their next match is Saturday-6-February when the compete at the Hudson County Duals at Union City High School starting at 10:00a Monday-8-February  against Bergenfield at Home in Speary Gym starting at 7:00p

The Bogota Lady Bucs Basketball Team traveled to Cresskill and suffered a 16-54 loss. Tatiana Bruno had a team high 8 Points with Alanah O'Brien scoring  the only Three Point basket for Bogota.
Their record is now 4-11. The next play at Dwight-Englewood  on Saturday 6-February at 11:00a Their next league game is on Thursday 9-February when the travel to Palisades Park for a 5:30p tipoff.
The Men's Basketball team team play Cresskill at Speary Gym. Before the game  Bogota  Athletic  Director Brad DiRupo took time to recognized  Coach Jay Mahoney  on  coaching  his 600 win  on Tuesday.  Cresskill Coach Mike Doto presented Coach Mahoney with a certificate honouring him on his 600 wins from the Cresskill basketball program. Coach Doto also mentioned some of those wins came against him as both a coach and player over the years.   Then Former Lady Bucs Basketball Coach Sterling presented a cake  decorated with 600 wins on it. Next Principal Damian Kennedy presented  Coach Mahoney a plaque from the entire school for his accomplish.  Finally  Kyle Mahoney presented his Father with a game ball from his historic win. At the end of the ceremony Brad DiRupo  announced that he will make a recommendation that the basketball court in Speary Gym will be named in honour of Coach Jay Mahoney.
As for the game itself Bogota on the strength of three point baskets took a 19-12 lead after the first quater. The Cougars then came back to go into the half with a one point lead. After the restart Bogota regained control of the game to come away with a 62-50 win.  Dieker Padrino had a team high 18 Points with Andrew Riad led the team with 4 Three Point Baskets.  Chris Alcantara a team high of 6 rebounds. This moves their record to 11-5  They next play New Milford on Friday 5 -February at home in Speary Gym. 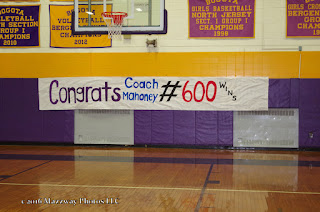 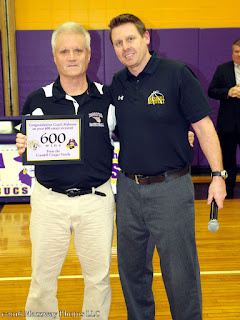 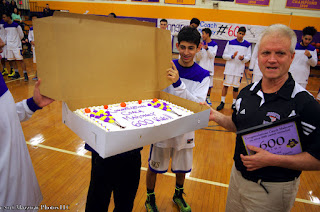 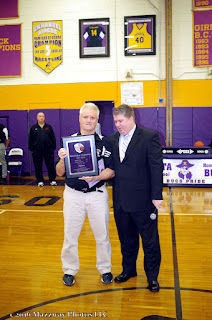 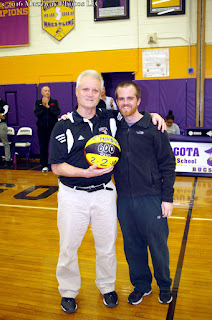 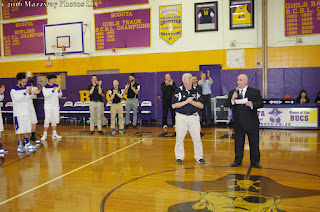 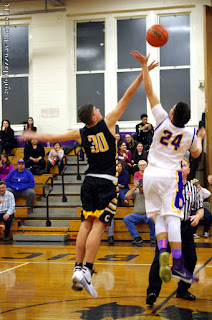 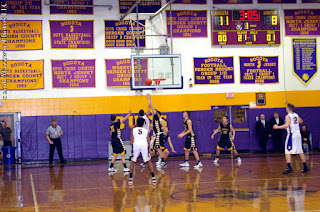 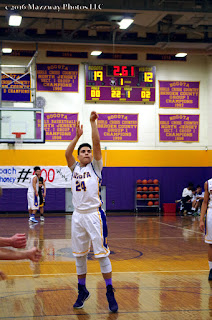