17-October-2018
On Tuesday-16-October the Bogota Board of Education held their second board meeting for the month of October. During his reports Superintendent Damian Kennedy announced that the Board of Education had a special meeting and was able to work on a contract that will be forwarded to the Borough of Bogota for their review. There will be details going into the contract that will have to be agreed upon, but the Board of Education is committed to providing Law Enforcement Security Officer class 3  (LESO C-3) officers in all three schools.
A Law Enforcement Security Officer class 3  (LESO C-3).  Are former Police Offices that had been retire for at least three years. Anyone accepted for this position would be hired by the Board of Education, but would need to go through a background check and training under the authority of the Bogota Police. LESO C-3 would be on duty during regular school hours for the length of the school year. Each LESO C-3 would be under a one year contract and evaluated at the end of the school year.  A LESO C-3 would be dressed in a casual attire  (polo shirt & khaki pants) and would carry a sidearm . These officer would instructed not to perform arrests, but to manage a situation until a uniform officer arrives.  The Board of Education will submit their proposal to the Bogota Borough Council for their approval, and to negotiate  contract for the LESO C-3 officer that will be hired. The Board of Education also reaffirmed their  commitment  to hire an School Resource Officer (SRO).  There is a agreement that half the cost of  the SRO would taken up by the Borough, with the BoE accounting for the other half of the Officers salary.  Due to budget complication the Borough Council asked the BoE to wait on their decision to hire an SRO until January of 2019.

Then Superintendent Kennedy then gave a presentation about the results of the latest PARCC testing for 2018. The overall results of Bogota Student from 3 grade to 11th grade was higher than the state average. The results in English Language Arts (ELA) was 13% higher than the statewide average for Students obtaining passing score in this tests.  In Math Bogota was 3% higher than the statewide average for Students obtaining passing score in this tests.  The few areas that Bogota fell below the state average was 8th grade ELA and some High School math. Superintendent Kennedy expressed his concern that both 8th grade English class did not go through the entire school year with the same Teachers due to maternity leave.   With the lower math scores Superintendent Kennedy is looking into the way math is taught in both Steen and Bixby  schools to see if any of those techniques can be applied in the higher grade levels. He also said that he want to look into the possibility in moving Teachers to different courses which they be strong in.
His conclusion was that the district as a whole is increasing their passing score over the last three years and is looking for ways to keep the positive trend continuing in the coming years.
All the agenda item were passed.
The next Board of Education meeting  is scheduled to take place on Tuesday-20-November, and will start at 7:00p. This will be held in the High School Cafeteria  located on the second floor of 2 Henry Luthin place. Access to the High School is through door #M on the South side of the building.  This is open to the public. 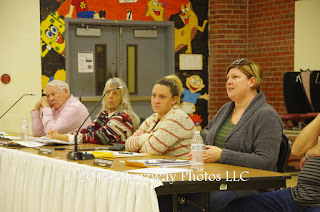 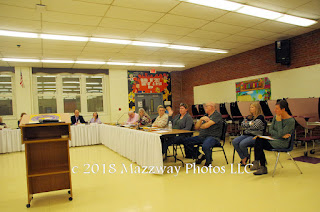