21-November-2018
On Tuesday-20-November the Bogota Board of Education held their meeting for November. In his Superintendent's Report Mr Damien Kennedy first mention that the over the Thanksgiving Holiday some additional Asbestos Abatement  to some rooms on the lower level. . Also the upper level of the parking lot was paved and  is available for use. The painting of spaces will also take place over the Holiday break.
Another announcement Mr. Kennedy made was that with the use of the District's new gmail account there will be a filler that will alert schools official if any suspicious activities are present in messages sent on it.  This will work with the new "Speak-up" program which will allow Students to report dangerous ,or suspicious actives to school officials.
His final announcement was the participation of some of the male teachers in growing their beards for "Movember". Then the Students gave in donations to suggest how the bread should be trimmed. This raise over $300, and the results can be seen at: https://twitter.com/bogota high school.
The Board approved all the Agenda Items some personnel items of note was the acceptance of Karol Misa as Varsity Bowling Coach. And the hiring of Ken Varon as the new Varsity Bowling Coach. Other new coaching placement are Amanda Breiss as Head Cheerleading Coach , and Miranda Rumack as Assist Coach. Edwin Fiscal hired as a Varsity Wrestling Assist Coach. Boula Takla to coach Middle School Wrestling , and Brain Appleton to continue to coach in the Weight Room.
In public comment on parent talked about the new crossing  on Palisades Ave, in front of the High School. She said that not all drivers are obeying the warning lights and could there be an Crossing Guard assigned to the area. She was told that because it it a public street that Guard must be assigned by the Borough of Bogota. One Trustee said he will contact the Police Chief about the situation there.
The final item was that the Swearing in Ceremonial for the trustees voting in during the election in November will occur on Thursday-3-January-2019 at 6:00p. Eileen Lewis, Kathy VanBuren, and Michael Connors will be given the oath of office at that time.
The next Board of Education meeting  is scheduled to take place on Tuesday-18-December , and will start at 7:00p. This will be held in the High School Cafeteria  located on the second floor of 2 Henry Luthin place. Access to the High School is again through, near the Gym on the North side of the building.  This is open to the public. 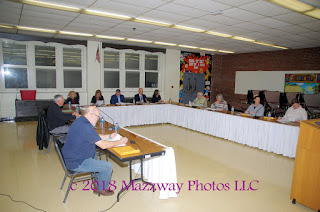 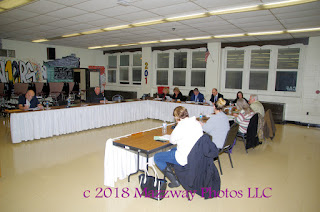 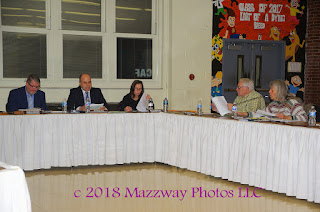 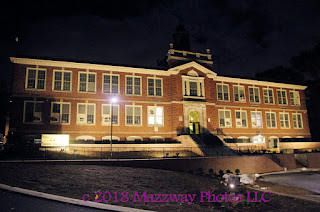