22-February-2020
On Saturday-22-February the Bogota -Ridgefield Park Scarlet/ Bucs competed in the New Jersey State Interscholastic Athletic Association  Men's District 5 Tournament. This took place in West Essex, NJ. The first bout is scheduled to start at 9:00a .  Two Scarlet/ Bucs became District 5 Champions.  #1  ranked Adam Albino  at 106 lbs defeated #2 Jack Bastarrika from Mount Olive by a 7-3 Decision.  #2 ranked Andre Ruiz  at 126 lbs won a 3-2 Decision over # 1 Logan Mazzeo of Emerson.  Mr.Ruiz was also named the Most Outstanding Wrestler at District 5 Both men will now move on to the Regional 2 Finals.  This will  be held on Friday-28-February at Mt. Olive, NJ 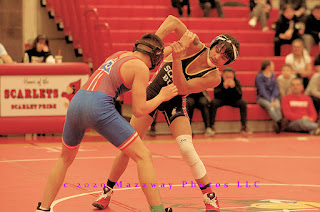 Scarlet/Bucs Wrestler Kayla Zeppetelli at 151 lbs. has qualified for the New Jersey State Interscholastic Athletic Association  North Jersey Region Women's Tournament. She currently is ranked #5 for this tournament.  This will take place on Sunday-23-February and be held at Union High School . The first bouts are scheduled for 9:00a