On Saturday-21-November the Bogota Football Bucs traveled to Emerson to play the Cavilers for the Union Division Championship. For the 2020 Football season the New Jersey Interscholastic Athletic Association (NJISAA) formed a new division. This was created to allow the smaller schools of the North Jersey Interscholastic Conference (NJIC) to compete with other programs of the same size. Bogota was joined by Emerson, Ridgefield, and Weehawken who were also moved out of the Patriot Division. Palisades Park and Elmwood Park rounded out the six team division. This  year would see Ridgefield's re-entry into Varsity Football after a 4 year absent. Palisades Park fielded their own varsity team leaving their agreement with Leonia after two decades.
The original plan was these six team would play each other in a regular season. The top four team would enter into an inter-divisional playoff round, with a Championship game. Union Division teams would not be eligible to play in any NJISAA group Championships. Then with covid-19 restrictions, and cancellations games would cause a change in playing dates, or postponed. Elmwood Park would stop all Varsity Sports after three games into their season. All the other schools continued playing, but with many schedule adjustments. Bogota, Emerson, and Palisades Park  would be the only schools to play a full division schedule.
Bogota having a 3-1 record and Emerson being 5-0 the NJISAA called for their game to be moved to Saturday Afternoon-21- November. This was then designated as the Union Division Championship game for the 2020 Season. The game start with a scoreless first half. In the second part of the game the Bucs would open the scoring on a Gabriel Nunez 4 yard Touchdown run. Ashanti Caviness would add the two point conversion. Mr. Caviness would score the first of his three touchdowns on a 2 yard Quarterback draw. At the end of three-quater time Bogota would have a 14-0 lead. In the final 12 minutes the Bucs would score twice more. Ashanti Caviness would sneak in for the Major score from the one yard line. He would then put the game out of reach with a 75 Touchdown run. Mr. Caviness would run for both two point conversion  and lead Bogota to a 30- 0 Union Division Championship Victory. Ashanti Caviness finished with 24-Points and Bogota will end their season with a 4-1 record. After losing their first game to Elmwood Park the Bucs would go 4-0. In their last four game Bogota would score a total of 158 Points for a 39 1/2 average. the Bucs Defense would allow only 46 Points in the final 4 games posting a 11 1/2 average of Points allowed.
This is the first Bogota Football Bucs Championship since the 2006 North 1 Group 1 title.
Select photos from the Bogota Blog NJ collection of  Bogota Sports are now available for purchase. These may be order from the Bogota Blog NJ Zenfolio store at: Bogotablognj /Sports 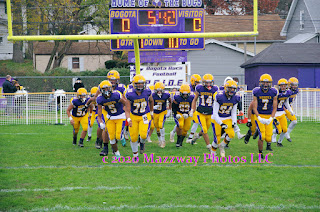 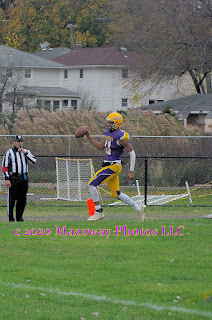 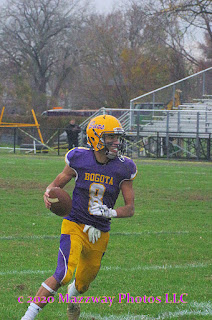