20-December-2016
On Monday-19-December the Bogota Public Library hosted a Smartypants lecture as an introduction to the social media site known as Facebook.  This was presented by Library Director Radwa Ali. She started with the basic of how to sign-up and create a personal Facebook page. How to post messages, comments, responses, and photos on the site that can be shared, and seen by others. She said that while there is no fee to join Facebook the cost is the lack of privacy that could occur by joining , and posting on this and other social media sites. Ms.Ali did explain some of the tools available to limit  what can be seen by others on the internet. A major part of  setting-up  a page is whether or not to make it Public  or Private. A Public setting will allow anyone with an internet connection to view anyone else's content on Facebook. A Private setting will limit the viewing of original content to only those  who have been granted access to a person's site. However if the second parties site is public there is still a possibility that other will have access to a person's Facebook Page.  There was also an explanation of how to  "friend" another person's site and the different between categorizing someone as a "Friend" or an "Acquaintance". Friending will allow more access to a person's Facebook page and content while an acquaintance will have less access. The attendees were also told of how to block  their page from other people and companies if  so desired. Some security setting were also shown, like a user can set which input sources can be used, and that a user can learn if they are being "Tag" on someone else's Facebook page ( tagging is have a person named added to a post , or photo on another site.)
While there is a consent concern about the misuse of Facebook, the benefits is to keep in Family and Friends, both old and new. To found out information that may be an interest to a person, and learn about community events and organization that would normally go unnoticed. Ms. Ali and members of the audience also told stories about how any social media must be used with caution. These examples were only of employees being terminated from their jobs because of comments about ones, company, or clients of a company. Another was  a story of someone having an excused absent from work only to to have a photo posted that shows the person visiting a recreational location.  There have also been news reports that have lead to Workers Compensation claims being denied and even arrest from stories and photos posted on social media . With these stories Ms. Ali reminded the audience that the cost of using any social media is the loss of some privacy.
There were some questions if there will be a follow-up workshop. Ms Ali said that there is not another Facebook workshop planned, but if  enough interest is shown  a second workshop could be scheduled. She did announce that a Smartypants lecture about the businesses site"Linkedin" is being planned for January of 2017

Also on the Library's main floor is a tribute to former Children's Program  Director Nikki Spiegel. This is located near the circulation desk with photos of Ms. Spiegel work at the Bogota Library and a memorial book to share thoughts and wishes with other. 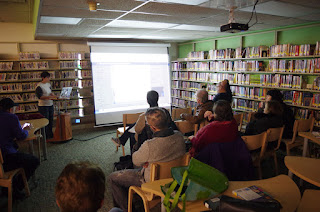 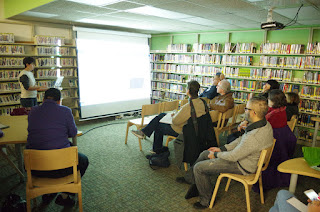 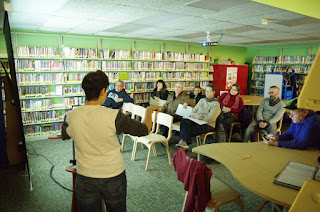 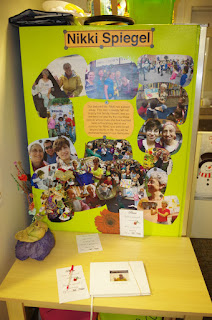 ( To help  support Bogota Blog NJ with it's coverage of Local news & sports please contribute what you can by using the  donation button  at the top right of the page.)
Posted by Bogota Blog NJ at 9:01 AM