On Friday-6- April Congressman Josh Gottheimer of the New Jersey 5th Congressional district held a press conference at the Rothman Center on the Hackensack Campus of Fairleigh Dickinson University. This was to announce his plan to direct the Dept of Health and Human Services to work to improve their response to the prescription pain killer crisis affecting many citizens. Congressman  Gottheimer was joined by Bergen County  Sheriff  Michael Saudino, FDU's Dean of School of Pharmacy and Life Sciences Dr. Michael Avaltroni,  Hackensack UMC’s Dr. Michael Kelly, and Ms Gale Cole to present his proposal. Ms. Cole lost her son,  Brendan Cole , due to a heroin over dose after becoming addicted to prescription pain killer while recovering from an injury suffer while playing college lacrosse.  Ms Cole now operates a Family bereavement group "Hope and Healing After an Addiction Death" to aide others experiencing the same situation as herself.
Sheriff  Saudino talked about how his, and other Police Depts have moved from simply  arresting and incarcerating suspects, to learning the signs of opioid addiction. He explained that in some case suspects are offer counseling, and even recovery programs. These effort will not erase any charges but may be use on behave of the suspect. Another program is having convicted drug uses will speak to High School Student about the dangers of abusing  prescription as well as non-prescription medication.
Congressman  Gottheimer  talked about the rise in cases of prescription pain killer addition and the similar rise in heroin usage.  This has also cause a spike in heroin related death from overdoses and now is at epidemic levels.  He announced a plan,  backed by colleagues from both parties to ask the HHS to adopted the following strategy  to help protect student athletes.
The three fold plan with the first step being have the HHS to  provide up-to-date data and information on actions taken to help student athletes who are prescribed opioids. It is critical that we have up-to-date information so we can identify the scope and magnitude of this emergency. This would fix he problem of the fact that information currently is not publicly available.
Next is requiring  the  HHS should report on current pilot programs available for student health providers, athletic directors, and athletes.  The Congressman added: "We need a comprehensive look at what is available to universities and coaches, what resources they take advantage of, and what is working. We need to make sure that New Jersey and New York universities and their teams are utilizing the best practices and engaging with available resources."  This part would start with a ground level cooperation with coaches, athletic directors, and team doctors. all working together to know the early warning signs to help intervene when a student is encountering a problem. If a coach or teammate notices that a student athlete is lagging in the classroom and on the field, or showing an unusual lack of interest in his or her sport, it may be an early warning indication of addiction.

Team Doctors, Coaches  and Parents must also make athletes aware of the danger of opioids before issuing prescriptions, especially if a non-narcotic medication is sufficient for treatment, and to track them if they are using a narcotic.  They have a  responsibility to watch out for the players and not just to medicate them to get them back on the field for the next game.
The final part is having the  HHS  share information on what more can be done to help students on college campuses fight this epidemic. The need is to have an informed plan of attack that leverages the resources of the federal government, be it  also needs the research and data at HHS and CDC, existing grant programs, or new mandates.  Congressman  Gottheimer also said: "When a child’s brain is still developing, we need to take everything into account before they receive a prescription. Addictive substances have extreme consequences on young brains, and we must educate our children, coaches, and parents early on the disastrous effects of these harmful drugs.
We know that our children’s brains are still developing at 21. If a student gets exposed to opioids, their brain gets rewired and it could take a year to fix the damage. It’s even worse if the student is predisposed to addiction. Doctors have the responsibility to accurately inform parents on what they will be prescribing their children, the potential disastrous outcomes, and the alternatives."
He hoped this action by the Government, Schools, Coaches, Parent , and the Students themselves will be a key is to avoid addiction in the first place. So that today's and future  Students can successfully avoid addiction without prescribing opioids when non-narcotic medications are enough.
When asked about High School Students, Congressman Gottheimer said this type of  program should include all ages of Student stating with Kindergarten to 12th Grade. Ms. Cole added that the New Jersey State Interscholastic Athletic Association, does of policy on opioids, and other prescription pain killer abuse and encourages anyone involved in schools sports learn about their policies.  Another question was the addition more spaces to assist those suffering from their addiction to help them recover, The Congressman  said that funding has been approved , but would like to see more data to found out what other resources may be need to alleviate the magnitude of this crisis.
After the press conference Congressman Gottheimer talked privately with Student Carly Edelman about her friends and teammates that could benefit from treatment for  addiction  to  prescription pain killers.
( To help  support Bogota Blog NJ with it's coverage of Local stories & sports
please contribute  at: donate to Bogota Blog NJ ) 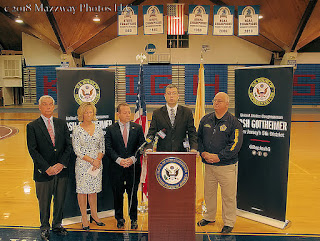 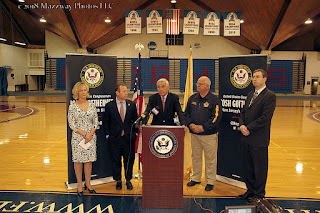 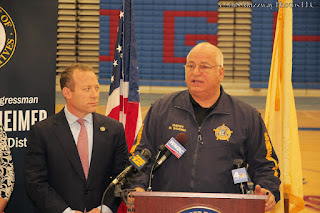 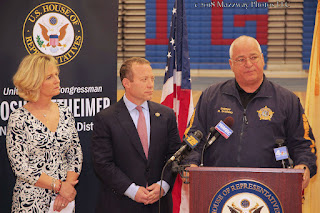 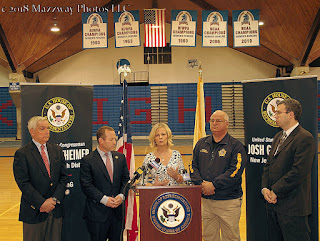 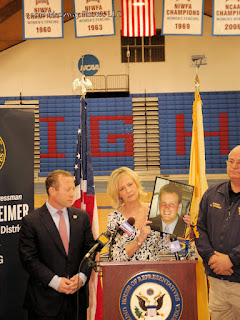 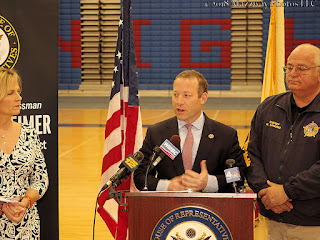 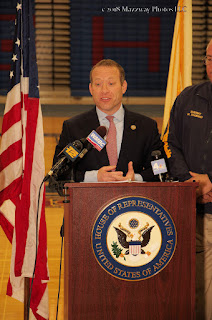 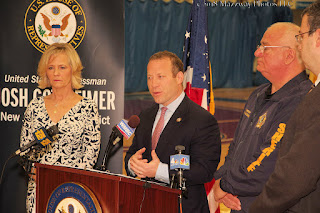 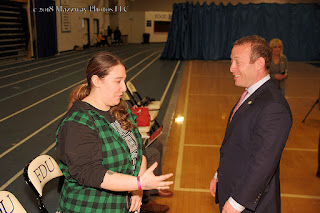 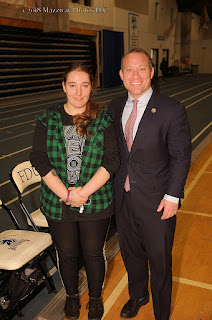 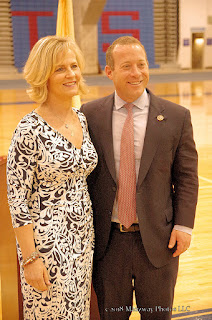