30-April-2018
On Saturday the Varsity teams from Bogota played in the Coaches vs Cancer Tournament in Park Ridge. Both teams played the teams from Dwight -Englewood. Bogota opened the scoring with one run in the first inning for an early lead. Both teams had a scoreless seconding inning with the Lady Bucs having a 1-0 going into the third. Bogota would score six runs in that inning, then add another eight in the fourth inning. Bogota would win the game by a score of 15-0. Amber Vazquez would hit her first Home Run  of her Varsity career and record 4 Runs Batted In. Sophia Marquez would also hit a Home Run for Bogota. Madison Heck would have a Triple, and Strike Out 12 for the win. Jayleen Arce, Anna Granquist, and Nylene Mateo all hit Doubles.  Bogota's record is now 9-4. The next play Park Ridge on Monday 30-April. This will take place at Lady Buc Field in Olsen Park, the first pitch is scheduled for 4:00p 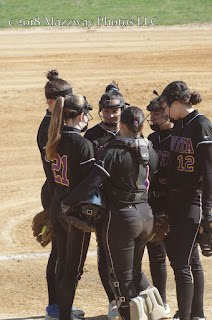 The Men's team gave -up five first inning runs the Bulldogs, but were able to score one back, to trail 1-5. Bogota would then tie the game at five with a four run third inning. The Bucs would enter the seventh inning with a one run lead, but Dwight -Englewood would score the run need to set-up extra inning. D-E would score three time, and the Bucs could answer them and ended up losing 7-10.
Tim Barcon would have two Doubles and record a game high 3 Stolen Bases. Jake Marino would also have a Double. Mathew Fitzgerald  and Jose Marte would have 2 Runs Batted In. The Bucs record is now 4-8. Bogota's next game will be at  Park Ridge on Monday 30-April the first pitch is scheduled for 4:00p 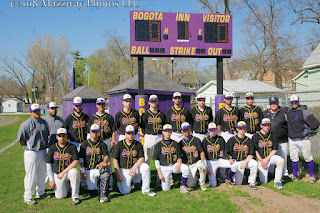