2-May-2018
On Tuesday-1-May the   Bogota Board of Education held its first meeting for the month of May. At the start of this meeting Superintendent Dr. Vincent Varcadipane gave a presentation of the preliminary school board budget for 2018-19.  Some of the main points Dr. Varcadipane pointed out was that the increase on the a average assessment of a home in Bogota would increase by about $75.00. this is 40% less than last years budget. One reason for this was that the capital project completed this year have already been paid for. No bonds or loans were needed with these improvement, and no interests needs to be paid.  The one outstanding debt is for the expansion of Steen and Bixby Schools in 1998. This loan is scheduled to be payed off in 2023.  Items in the preliminary budget are the hiring of a School Resource Office for the High School This position would be currently active Bogota Officers, and the salary would be equally paid by the Board of Education and the Borough of Bogota. This officer would check visitors into the building.  Provide workshops for Students and Staff on a variety  of topics including substance abuse and harassment.  The main duty would to be secure the safety of  Students and Staff in an emergency situation.  Additional Class III officers would be assigned to each school. These would be retired officers whose duty would also be to secure the safety of  Students and Staff in an emergency situation. Both positions would  have the officer carrying a weapon.  Another security budget item would be the improvement  of the security system with door swipes at all schools, new cameras for Steen & Bixby, and the system integrated to the new Bogota Police System.
After the budget presentation Board President Lisa Kohles  announced that the trustees  have agreed to nominate current High School Principal Damion Kennedy to become the new Superintendent of the Bogota Public School District. Principal Kennedy appointment will be officially voted on after his contract has been approved by the office of the County  Superintendent. Principal Kennedy has apart of the Bogota School System since 2010, first as a Vice Principal at the High School. He then move up to become the High School Principal in 2016 and has assisted in the modernization of the High School.
Next the Board accepted a donation of weight room equipment from Mr. Mike Lucas, which should start being installed at the soonest possible date. Next the Board then considered the agenda items. And a majority of these item were moved forward to a final vote at the next Board of Education meeting.
In public comment two Parents of Bixby School Students asked how the  ongoing work on the windows at Bixby. Dr. Varcadipane said that more delays  due to materials ordered by the contractor where under sized.  He also said that the School Board will be looking into compensation for this and any further delays.  He also has talked to Bixby Principal Damon Englese about moving the Bixby graduation to another location on the schools grounds, or possible a different venue.
Then the Board moved to closed session.  This meeting will be on Tuesday-15-May, and scheduled to start at 7:00p. This will take place in the High School Cafeteria located on the second floor of the High School at 2 Henry Luthin pl. Bogota, NJ This meeting is open to the public. 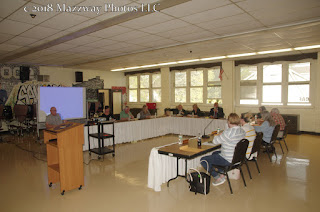 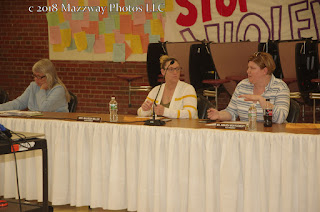 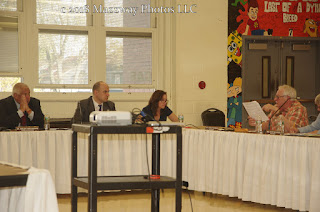 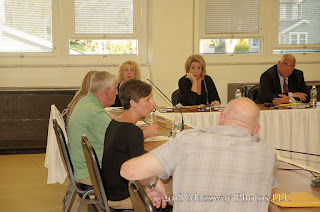 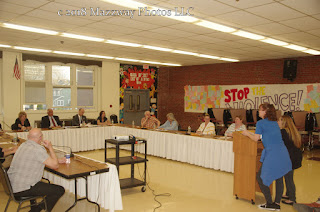