2-May-2016
Members of the Junior and Senior Class of Bogota High School were witnesses to a reenactment  of a motor vehicle accident cauce by an impaired driver. The Bogota Advisory Committee of Substance Abuse (BACSA) in conjunction with the Bogota Office of Emergency Management staged a simulation of a drunk driving accident. This took place at Feigel Field in front of the Student of Bogota High School.  Member of the High School Drama Club posed as the victims of a head-on collision as a result of a drunk driver.  Rescue units from Bogota, Ridgefield Park, Teaneck & Holy Name Hospital as well as the Bogota Police Dept. and the Bogota Volunteer Fire Dept took part.
Bogota Police Chief  Daniel Maye talked about the dangers of impaired driving could cause. Not just driving while intoxicated, but other forms of distraction that drivers face in the modern world. The  scene was described by  Tito Jackson, the head of the Bogota Office of Emergency Management. As the scene unfolded  Mr. Jackson , and Officers from the Bogota Police arrived first to assets the situation. When it was determined that more help was needed, Rescue unit from Bogota , and other town were called in to help. Bogota Fire Dept. trucks also arrived to assist and to be ready to extinguish any fire that may have happen.   While EMS rescuers were attending to the victims Police officer examined the driver to determine if he was driving while impaired. The Student saw the step by step process that First Responders handle , and  rescue the victims of an accident.  One victim did not survive the accident and had to be removed from the Bergen County Coroner's office until the Next of Kin was notified. In order to successfully have access to some of the victim Fire Dept. and Rescue worker needed to remove parts of the automobiles through the use of cutter for automotive glass, pry bars, and " Jaws of Life " tools.  Victims were treated, and stabilized at the scene then taken to waiting Ambulances to be transported to area Hospitals.   After the rescue was completed Chief Maye, and  Coordinator Jackson address the Student to explain what they just saw, and the seriousness of driving under the influence of mind altering substances . They also explained while it may be called " Drunk Driving" other thing could lead to impaired driving including both legal and illegal drugs. They asked the Student to think about who & how others appear, before getting into a car with them. He insisted that it is better to be safe and call a Parent, other Adult, or even a taxi in order to have a safe ride to where they would want to go.
For more about this story  and video please go to the CliffsidePark Daily Voice at:  http://cliffsidepark.dailyvoice.com/police-fire/video-bogota-teens-portray-drunk-driving-victims/656512/
It was also pointed out that most of the EMS workers at this scene were Volunteers. He said that anyone 16 years or older could be a Volunteer EMS worker, or Firefighter. And if anyone wishing to do so can contact any of the Depts at: http://bogotafire.org/   http://www.bogotarescue.org/  or  http://www.bogotafirstaid.org/ for further information or how to sign-up. 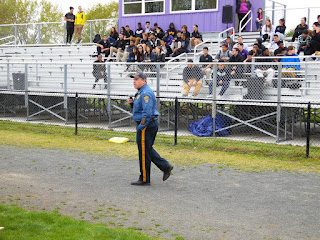 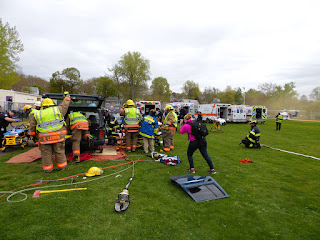 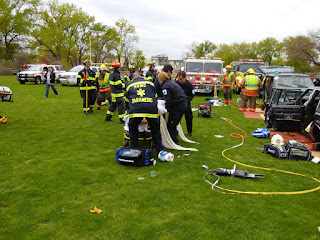 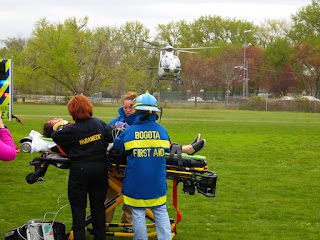 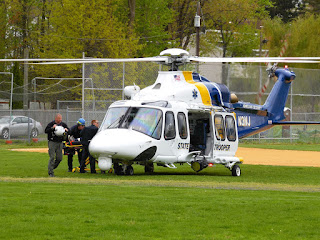 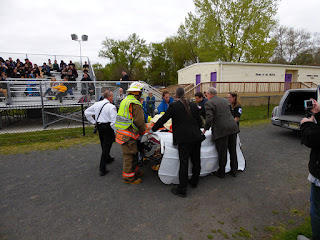