20-May-2020
On Tuesday-19-May the Bogota Public Library hosted a lecture about the history of the American Flag. This was present by regional Historian Kevin Woyce who explained the history of the American flag from it’s creation to its current version.  As the nation  was earning it’s Independence the  Continental Congress adopted a similar flag to the “Betsy Ross”  flag with 13 stars , and 13 stripes. in 1777. By 1792 two new states were admitted to the union. These were Vermont in 1791, then Kentucky in 1792. Then three years later, in 1795 a 15 star with 15 stripe flag was design. This flag would move from a circular star pattern to the current rows of stars.
This would be the flag that represented the United States during the War of 1812.  In the run-up to the Battle of Baltimore a large garrison Flag was made by some residents of the city. The flag  they made would measure 30 feet by 42 feet.  This was the Flag Francis Scott Key would see from a British Ship after the battle had ended on 14-September -1814. He wrote a poem called “In the Defense of Fort McHenry”, then the words would  be used with the music from a song called “The Anacreontic Song”. In 1899 the US Navy would use , what would then be called “The Star-Spangled Banner”  for some of their ceremonies.  It was not until 4-March-1931 that this would become the Official United State National Anthem.
The Mr. Woyce would continue to talk about the changes made to the flag after the War of 1812. He said the main feature would be that number of stripes would revert to 13, in recognition to the original 13 States, and one Star would be added for each new State joining the Union. He added that the new Flag would be unveiled the first Fourth of July after Admittance. One change that was not made would be explained when President Abraham Lincoln order the stars of those State that voted for session by left on the United States Flag as a symbol of re-unity.  There was a also a discussion of the different designs used by the Confederate States during the Civil War. By the time that War ended there would be 36 Stars on the American Flag.  The latest addition was the 50th star which represents the State of Hawaii when it was admitted in August of 1959.
The program finished with Mr. Woyce talking about, and playing, a number of songs based on the pride in the United States of America, and the flag that is one of its main symbols.

For more information on these and other program continuing at the Bogota Public Library please go to: https://www.facebook.com/bogotalibrarynj
Or visit their website at: https://bogotapubliclibrary.org/ 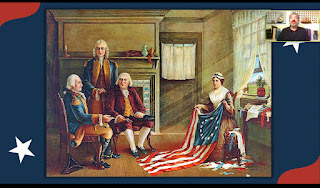 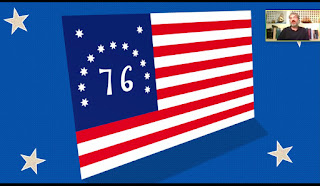