30-May-2017
On Memorial Day -29-May the Bogota American Legion Clifford Dunn Post #117 and The Bogota VFW  Ralph Hall Post #5561 host the Borough's annual Memorial Day Remembrance Ceremony in front of Borough Hall. While the recurring rain showers limited the attendance a number of  residents, some with their families, joined together to pay tribute to the Women and Men of the United States Armed Forces who have given their lives in defense of the Country Joining the citizens were Sailors from the USS Lassen, who are visiting the area as part of Fleet Week.  The ceremony began with Senior Airman Aaron Genier leading the Pledge of Allegiance. He was followed by the Invocation by Reverend Tim Graff of St. Joseph's Church.
The next speaker was Walter Croft the Commander of the American Legion post #117. Commander Croft talked about the need to remember those who gave their lives, and how at times the loss was great the time to remember never ends. This was made evident in recent months with the the return of  Bogota native 1st Lt William Ryan who has been finally laid to rest in his home country after 48 years of being list as MIA.
Bogota Mayor Chris Kelemen was the next to address the crowd.  His talk was that of a nation remembers those who have served the Country. Dating back to the revolution, and the beginnings of what is now Memorial Day. A practice of decorating soldiers grave just after the Civil War started the tradition of Decoration Day. late in the 19th Century  Decoration Day was officially named Memorial Day. Mayor Kelemen then asked any Current, or former members of the Armed Service raise their hands to be thanked for their service to the Country. After that anyone in attendance was also asked to raise their hands to be recognized if a relative had served in the Armed Forces. This was to show that the Women and  Men who serves are support by those who stayed at home.  In closing Mayor Kelemen presented a plaque to Walter Croft the Commander of the American Legion post #117. A similar plaque will be presents to Alex Hernandez Commander of  The Bogota VFW  Ralph Hall Post #5561. This plaque had four replica street sign from Bogota those streets named after Clifford Dunn, Carl Fisher, William Gray, & Albert Kovar who were the four residents of Bogota who lost their lives during World War I. The newly installed signs have a white star in the upper corner signifying the service of those Men.
Bogota VFW  Ralph Hall Post #5561 Commander Alex Hernandez was next to address the crowd. He reminded everyone the ultimate price of freedom was the lives of the Women and Men  given in combat. He continued by mention that since 1775 to the present day over 1.3 million Americans have died in combat. With another 1.6 million wounded or Missing in Action.  The Col. Andrew Keane of the US Air force recounted some of of the thousand citizens of New Jersey that have their lives in service to the US Armed Forces.
Next came the reading of the names of those who are now "Absent" by Commander Croft and Airman Genier as a poppy flower was place on a cross for each one. Next  Bagpiper Mike Sorrentino lead  Marianne Pigoncelli to place a wreath at the Memorial for POW-MIA. Ms Pigoncell was escorted by Lt Kevin Hester and CSSA Joshua Samyang.
Finally former VFW Post Commander Al Hermann read his poem about the loss of youth while defending the Country. 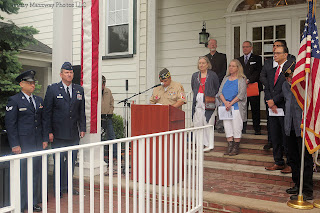 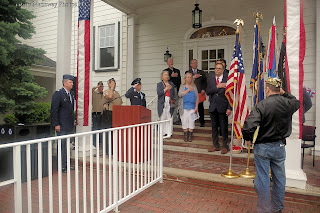 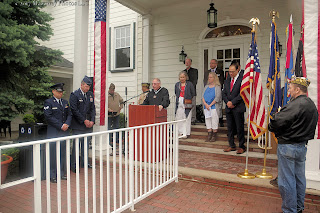 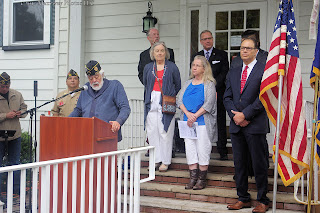 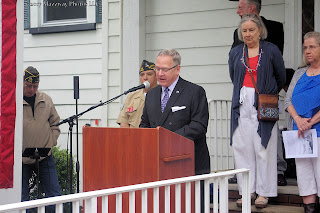 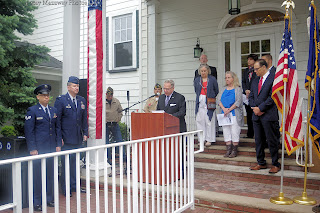 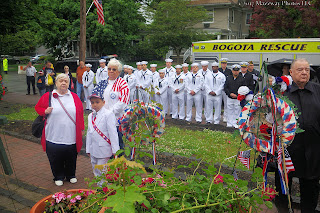 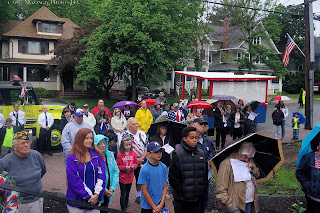 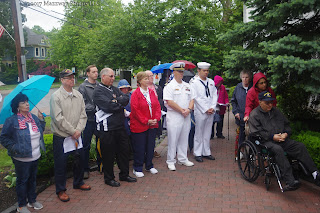 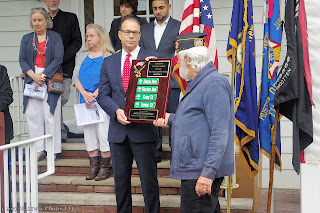 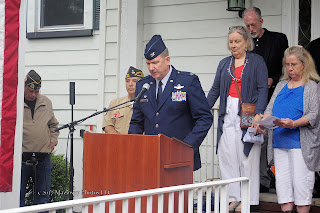 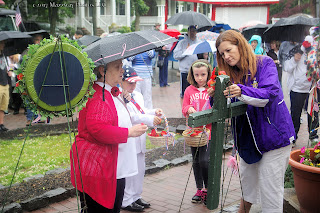 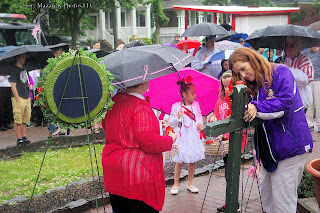 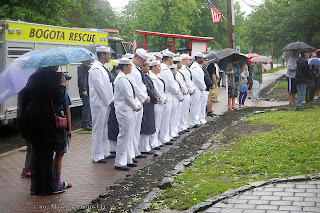 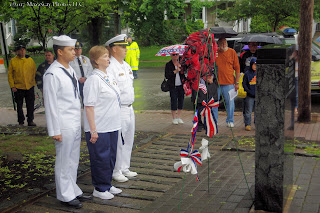 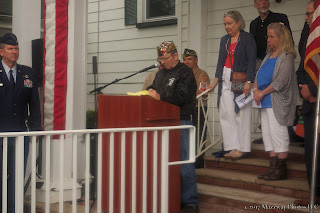 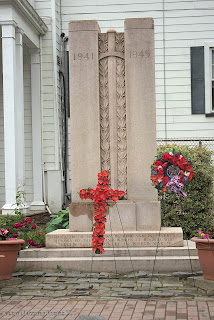 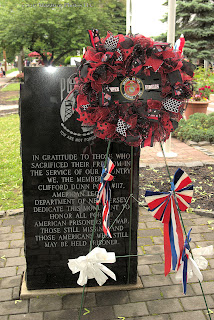