31-December-2018
On Friday-28-December the Bogota Lady Bucs Basketball team played in the consolation game of the Ridgefield Tournament. They would face the Memorial Lady Tigers from West New York.  Bogota would score only two points in the entire game and  suffer a  37-2 loss. Bogota's record is now 0-5. They next play on Thursday-3-January-2019 when the travel to St. Mary's High School from Rutherford NJ. Tip-off time is scheduled for 4:30p.

On Saturday-29-December the Men's Basketball Bucs played in the consolation final of the Garfield Holiday Tournament. The would face the Tenafly Tigers, in a game that would have consistent lead changes.  Tenafly would hold an early 22-18 lead after the first quater. Bogota would double their opponent's scoring in the second quater and take a 36-31 lead into the locker room.  In the third quater the Tigers would a again outscore Bogota for the eight minutes and hold a one Point advantage 49-48.  The Bucs would take total control of the final quater, while outscoring Tenafly by 21 Points to win the game 76-56. Bogota's Kenjiee Polanco and Tenafly's  Eric Berschadsky would both have game highs with 20 Points.  Taj Collins would lead all scores with 4 Three point baskets.
Bogota's record is now 5-1. The Bucs next game is on Monday-7-January-2019. This will be against Saddle River Day School. Game time is scheduled for 7:00p and take place at home on the Jay Mahoney Court at Speary Gym. 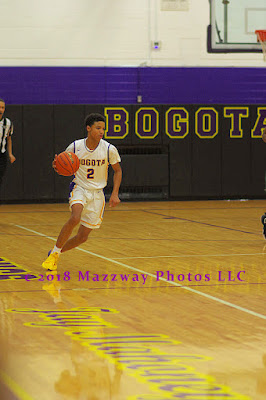