3-June-2019
On Saturday-1-June the Bogota Public Library hosted a lecture by Technical Sergeant Joseph DeLuccia. Sgt DeLuccia served as a Radio Operator and Gunner on a B-17 Bomber in the Summer and Fall of 1944.  Having an interest in Radio and Electronics he was drafting straight into the Army Air Corps 8th Air Force out of High School. After basic training and flight testing Sgt DeLuccia and the air crews he as apart of were assigned to the 457th Bomb Group and placed  in the 750th Squadron. His squadron were based in Glatton England. His first mission was on 18-June-1944  was to target Hamburg in support of the Allied troops who were moving out from the Normandy beachhead after the D-Day invasion on the 6th-June. This first time in combat would be the beginning of 32 missions he would fly in until 13 -October-1944.
Sgt DeLuccia talked about this mission and relate it to rest of his time in the skies over Europe at that time. All the missions were based on weather conditions over the scheduled target and sometimes were change at the last minute. On the morning of the 18th he woke up to a clear, star filled sky, and knew they would be flying that day. As a habit he would forgo breakfast and wait to eat on his return to base. One reason for this was the B-17 as few of the aircraft of the day were not pressurized. This who exposes the flyers, at the high altitude needed to fly, to temperatures of -40 degrees or even colder. Having to relieve oneself would mean exposing bare skin to those conditions. It could also mean that an airman might have to disconnect from the oxygen feed as well. Other reason  he said was that the funnel & tube use to eliminate urine from the plane would freeze up after one use and it would become unusable until well after the mission.
Some of his missions would include to target Hamburg, Leipzig,  Peenemünde, Munich  along with three mission to “ The Big Town” meaning Berlin. While no one mission was less dangerous, the trips to Leipzig, Munich, and Berlin were even more so. Sgt DeLuccia said that the targeting of  Leipzig was hard because of the skill of the German Anti Aircraft  defenders in that area.  After returning from one of these missions his air crew was assigned a new ship to fly, due to the damage inflicted by ground fire. Munich was a challenge because of the distance needed to be covered. Berlin was one of the most harrowing as they were met with a strong force guarding the German Capital.
While the B-17 is sometimes called “The Flying Fortress”  it was still only a bomber. The nickname was not favored by some of the aircrews because it gave the idea the plane could fully defend itself.  Bomber groups still needed fighter escort to reach and return from their targets.  A long range fighter plane was not delivered into the European Theatre until the P-51 Mustang. And when the P-51 was deployed its main mission was to shoot down the planes of the German Air Force. The Bombers,  as part of their  mission, was to lure the Luftwaffe into attacking the Bombers. Then Mustang would engage the enemy which meant  leaving the B-17 unguarded.  This would cause the flights over Berlin to be some of the most causality laded missions of the war.
After his 32nd mission Sgt DeLuccia was told he would be reassigned in order to let newer airmen get combat experience.  Joseph DeLuccia returned to the United States and flew on training mission for the rest of his service. Of the ten members of the crew he was apart of  one was killed in action during World War II. Another died while flying in the Berlin Airlift.  By the year 2009 Mr. DeLuccia had learned that the ninth member of his crew  had passed away that year. Now at 94 years old,  Technical Sergeant Joseph DeLuccia of the 750th Squadron in the 457th Bomb group continues to tell of story of a young Airman from New Jersey during World War II.  One last stories he told was that a B-52 Bomber group, in England, still is called the 457th, which was a puzzlement to him. A member of the audience  informed Mr. DeLuccia that the 457th was one of the most successful Bombing Group of the War and the new Aircrew insisted  they be assigned that number to honor the Airmen who flew before them. At the end of his lecture Mr. DeLuccia received a standing ovation  from those in attendance as a thank-you for his service to the United States. 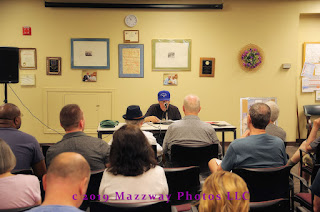 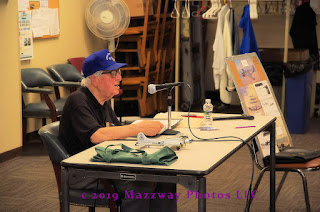 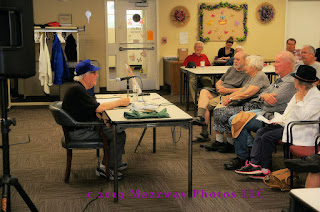 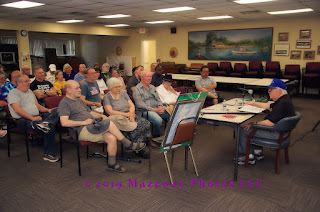 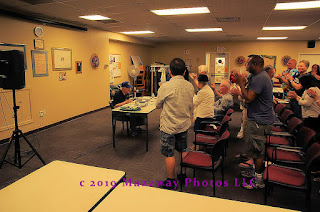 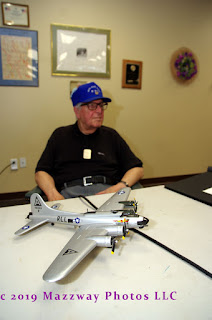 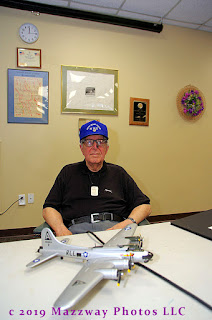