21-October-2021
On Tuesday-19-October the Bogota Board of Education held their second meeting for the month of October. In his report Superintendent Mr. Damian Kennedy talked about that the Executive Order that requiring all school personnel needs to be vaccinated, or be tested weekly, started this week. There was a mobile clinic  on site for district personnel to use. This is scheduled to be open to the public next week. Information on how to register to recieve a test for a Student of a Family member please go to: https://bit.ly/3G3gwZj
Superintendent Kennedy then talked about sending a survey to Parents and Student about the meals served in the schools. This is to start to create a committee for each of the four districts school to to provide guidance on how the food service can be improved.
Superintendent Kennedy also addressed a member of the Public concern about a number of incident that occurred during the first month of the school year. He said that school officials, and members of the contanted the situations. And that no other incident have taken place since, and safety will continued to be monitored.  Superintendent Kennedy added in saying that many other districts in the County have reported the same issues, and have also had a reduction of those event during the second month of the school year.
Then the Trustees moved vote on  the agenda.  All items were approved with the majority being a unanimous vote. Resolution of note were: the abolishment of policy # 8810. This was made redundant by the update of  policy #2270.
Policy #2270 reads:
The First Amendment requires public school officials to show neither favoritism toward nor hostility against religious expression such as prayer.
And will  permit upon applying the governing constitutional principles in particular contexts related to: prayer during non-instructional time; organized prayer groups and activities; teachers, administrators, and other school employees’ activities; moments of silence; accommodations for prayer during instructional time; prayer in classroom assignments; student assemblies and non curricular events; prayer at graduation; and/or baccalaureate ceremonies.
The following activities as outlined in the USDOE Guidance will be permitted upon applying the governing constitutional principles in particular contexts related to religious expression:  religious literature; teaching about religion; student dress codes and policies; and/or religious excusals.
Other resolutions were approval of funding for the appointment teachers for the After Schools programs. This funding is provided by the American Rescue Plan. Also Title III funding for the Adult " English as a Second Language"  Funding is being provide by ESEA  Title IIIImmigrant Funding.
One item was added, and approved by voice vote, was to honour former Bogota High School Art Teacher Mr. Les Brown. A plaque will be created for his work done as an instructor and support of Bogota High School Sport. A ceremony is being planned to occur during a basketball game this winter season.
The next Board of Education meeting will be on Tuesday-9-November and is scheduled to start at 7:00p. It will be a hybrid meeting with in-person attendance and available online. The in person meeting will be held in the High Cafeteria located at 2 Henry Luthin pl Bogota, NJ All in person attendee will be required to wear mask at all time while in the building.
For more information and to view previous  meetings please go their web-site at:  www.bogotaboe.com
( To help support Bogota Blog NJ with it's coverage of Local stories & sports
please contribute at: donate to Bogota Blog NJ) 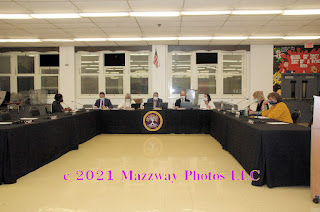 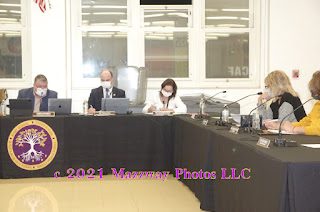