2-October-2021
On Friday-1-October Varsity teams from Bogota played those from Cresskill.
The Men's Soccer Bucs' hosted the Cougars  at home on Zakrzewski Field  in Olsen Park.  Scoring two 2 Goals in each have Cresskill would have a 4-1 road win.
Bogota's record is now 1-6. They next play on Thursday-5-October when they travel to Hawthorne Christian Academy. Kick-off is scheduled for 4:00p.
The Lady Bucs Volleyball team played the Lady Cougars at Speary gym. Cresskill would serve first and take a 2-0 lead.  Bogota then scored the next two points and tie the set at 2 apiece. There would be another tie a 3-3 until the Lady Cougars took a two point lead.   Bogota would get a service run from Ashanna Caviness and pull ahead by the score of 8-5. The Lady Bucs maintain their lead through-out the first set and bringing it to double digit figure by the end of the set. They would win the set by a score of 25-15.
The second set started with Bogota serving, but the Lady Cougars would score first. Helena Tobin served the Lady Bucs to a three point lead. Cresskill would answer and tie the set at 5. Bogota would retake the lead, and the Lady Cougars again tie the contest and take a short lead. With the score tied at 15-15 Bogota's Mia Pimentel then served the home to the lead for a final time.  As Bogota moved closer to a win  Cresskill's Niamh Tobin brought  her team to with in two points of another tie. The Lady Bucs then found the tree points needed to win the set 25-21 and the match 2-0. Bogota's record is now 9-1.
Mia Pimentel had a match high with 28 Assists, Ambra D'Angelico recorded 12 Assist for Cresskill. Ashanna Caviness had 18 Kills for Bogota and Niamh Tobin had 7 for Cresskill
Lady Bucs Helena Tobin scored 8 Service points with 4 Aces.
Bogota next plays on Tuesday-5-October when they travel to Palisade Park. The first serve is schedule for 4:00p 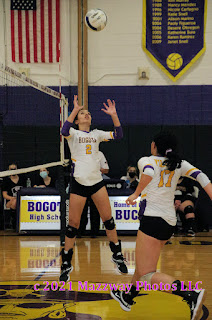 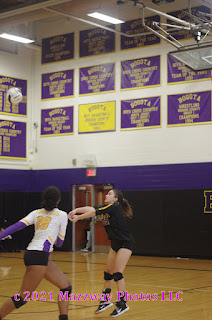 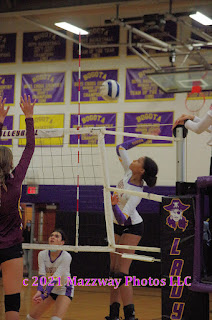