11-October-2021
Over the weekend of 9 & 10 -October the #8 ranked Bogota Lady Bucs Volleyball team played in the opening rounds of the 2021 Bergen County Women's Volleyball Tournament.
Bogota's first round match was against the  #23  Westwood Lady Cardinals and took place at home in Speary Gym.  In the first set Westwood would start the match serving and score first. The first 10 points were split by the two teams  and the scoreboard showed the set at 5-5.  Bogota would take a multipoint lead at 10-6. The Lady Bucs Seniah Burrell then stepped up to serve and starting a run of 13 straight points for Bogota.  This put the home team on track to win the set by a score of 25-7.
The next set started with the  Lady Bucs serving and score first. The Lady Cardinal would tie the match, and Bogota soon retook the lead. Bogota would out score the visitors by an approximately  3 to 1 ratio and won the second set by a score of 25-10 and a match win of 2-0.
The Lady Bucs were lead by Seniah Burrell and Mia Pimentel with both scoring match high of 10 Service Points including 4 Aces. Ms. Pimentel also recorded a career high with 32 Assists.  Westwood was led by Amanda Acosta with 9 Assists.  Ashanna Caviness had a match highs of 17 Kills and 8 Digs  for the Lady Bucs . Westwood's Lauren Smith scores 3 Kills, with Cassidy Orbe having 8 Digs. This moved Bogota overall record to  14-1 and into the second round.
The second round match was played against the #9 ranked Lady Raiders from Ramapo. This was play in Old Tappan. Bogota would win this match by a score of 2-0 ( 25-22: 26-24) and moved their overall record to 15-1.
Bogota's Ashanna Caviness had match highs of 18 Kills and 10 Digs. Ramapo's Caroline Thoma had 13 Kills. Mia Pimentel had 22 Assists and Victoria Somppi had 15 Assists. Helena Tobin recorded 9  service Point to lead all players for the Lady Bucs. Caroline Thoma had a match high of 5 Aces for Ramapo and Bogota's Mia Pimentel had 4 Aces.  Ashanna Caviness also had a match high with 10 Digs. Angelina Buhler and Carolina Villada both had 2 Blocks.
Bogota next plays a Quarterfinal match on Saturday-16-October when the face the #1 ranked Immaculate Heart Academy. This will take place at Old Tappan High School's  South Gym with a first serve scheduled for 3:00p
Select photos from the Bogota Blog NJ collection of  Bogota Sports are now available for purchase. These may be order from the Bogota Blog NJ Zenfolio store at: Bogotablognj /Sports
( To help  support Bogota Blog NJ with it's coverage of Local stories & sports
please contribute  at: donate to Bogota Blog NJ )
file photos 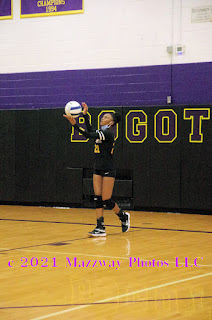 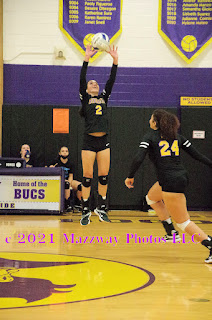 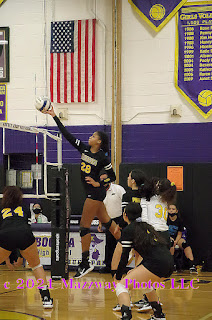 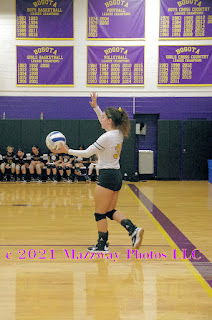