7-October-2021
On Tuesday-5-October the Bogota Borough Council held a Public meeting to hear and comment on the Change of Use for the land that is proposed to have a new Bogota Recreation Centre be built in Olsen Park.  There was  an earlier meeting in October of 2021 which address the structure to be built at that location. This included the entire project which consists of The change of use for approximately 2 acres of Olsen Park. The Outdoor space and open parkland will use for a new Bogota Recreation Centre, with a parking lot. Outdoor Basketball and Tennis courts and sheltered open area attached to the Recreation Centre. Within the structure there is a purposed gymnasium, including a basketball court with seating, locker rooms and public restrooms. There will also be park administration office, equipment storage kitchen and concession stand with both indoor and outdoor access.
First there was a presentation by both of the Borough’s Contracted Engineer company and Architectural firm, showing what the full project entails.
The first phase of this project would be to add two new basketball courts and a tennis court to the west of their current location. This would cause the removal of the band stand built several years ago. The bocce ball court and the walking path that borders the fence with the New York, Susquehanna and Western railroad would be eliminated. The current location of the basketball, tennis court, and the picnic pavilion would be removed, or disassembled to allow way for the new Rec Centre. The existing playgrounds would remain untouched.
The second phase of this project would be the building of the new Recreation Centre. The centre is planned to be a one story structure with a parking lot for 65 cars ( including ADA compliant spaces) to the east of the building. The Centre itself will have three entrance, the main one facing the parking lot, one to the north, and the third near the playground and be part of the concession service. The support infrastructure of the centre includes a back-up generator, a pumping station to allow all sewage waste to flowing to the main sewage line along River Rd. A storm water drainage system that will have a bio-scape system which captures and immobilizes pollutants. Then the stormwater runoff flows through into an underground drain system at the bottom of the container, where the treated water is discharged. Combined with an underground stormwater storage chamber to allow heavy rainfall to be drain from the parking lot.
Included in the presentation was proposed species of tree to be replanted toward the end of construction to replace any trees that needed to be removed. 30 trees are scheduled to be removed throughout both phases of work with 89 new trees, of a variety of species to be planted.  Also talked about was the sewage pump system, and the back-up generator.  The entire site is planned to be raise out of the flood plain, the the generator and foot and half above that.
When the Borough Professional finish their presentation the meeting was then open to public comment. The vast majority of the residents comments were to question the need to remove the number of trees planned. And the size of the parking lot.  Many of the concerns ranged from the overall look after the construction was completed. The effect on the quality  of life for resident living near Olsen Park. Along with the effect on wildlife and air quality, and the loss of a sound barrier from the sound of passing trains.  There was also concerns about cost and future,  and unforeseen, cost that the Borough may have to account for.
The Engineer representative agreed with the concerns over the loss of trees, and would look-in to try and reduce the number being remove. They also said that the amount of parking spaces is determined by the square footage of the structure, but could also be looked at.
Any additional comments can be submitted on this project and should be sent to the New Jersey Department of Environmental Protection, Green Acres Program, Bureau of Legal Services and Stewardship, Mail Code 501-01, 501 East State St., P.O. Box 420, Trenton, New Jersey 08625-0420, Attention: Bergen County Steward. Public comment on this proposed change in purpose of use will be accepted until October 19, 2021.  Also comments, general questions or other concern, can be sent by please email to:   GreenAcresApplications@dep.nj.gov
( To help  support Bogota Blog NJ with it's coverage of Local stories & sports
please contribute  at: donate to Bogota Blog NJ ) 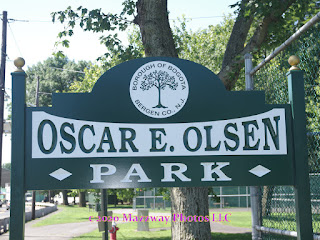 all drawing courtesy of the Borough of Bogota 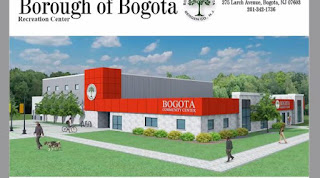 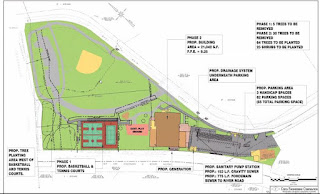 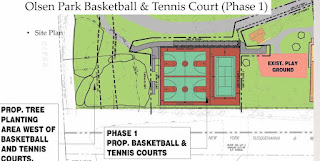 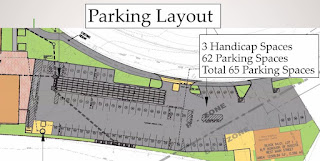