On Sunday 23-August the group KSAP had a Picnic at the shelter in Olsen Park. The group had gotten all the proper permission for the use of the park.  Some members arrived early to set-up for their event. What others ended up doing more than they expected. Isabel Bustamante, from Bogota Beautiful, Genesis Liu, and other members of KSAP, and Councilman Rob Robbins, who was just dropping off cookies for the event  saw the conditions around the shelter and found them unacceptable.  Trash of various types was covering the ground around the entire shelter, some seem fresh possible only a few day old, other under a the first layer from even longer before.  Then walking around the park old bottles, some broken with glass shards around, where on the Southern path. More discarded item from candy, & ice cream wrappers to more empty drink containers & even playing cards around the Band Shell. Along the drive towards the Environmental an old water containment boom was pulled out of the river and left near the Gazebo. This was later found out to possibly be from the Hackensack River Keepers.
When looking at the playground a layer of debris covered the area. Upon further inspection, holes under the swings have developed and the padding come out from under the surface and is now covering the play area.  After Councilman Robbins helped the other clean around the shelter he contacted  Borough Administrator  Joseph Scarpa.  By Noon the next day crews from the Bogota Dept. of Public Works cleaned around the Band Shell, and removed the boom was removed.  A replacement  flooring for under the swings has been order and it is expected to be installed soon.
A reminder was sent out to the Recreation Dept, who runs the Summer camp in Olsen Park, to police the area they are at each day. Councilman Robbins also talked about getting more trash cans place in the more used area near the Band Shell.
Earlier this year, for Earth Day, Bogota Beautiful organised a massive clean up the park with  a large number of volunteers cleaning the entire Western section of the park. Ms. Bustamante was upset of the condition around the shelter where at least three trash receptacle are in easy reach. Including one chained to the support of the shelter. While no one person or group can be blamed, it is the responsibility of everyone who uses Olsen Park to assist in the care of it. Walking the extra steps to properly dispose of trash is a duty that is easily done.
As for the flooring under the swings, it appears to be standard wearing down of the surface from useage. What needed to be done was to alert the proper authorities that a problem was developing. Once the Borough Government saw the problem they started the necessary action to solve the problem.  Bogota is a small town where any citizen can help when needed. It is asked that if something seems out of place the Borough Government should be informed. Attending a Council meeting, visiting Mayor Keleman  when he has open meeting on Mondays Night, or even emailing any of the members of Council to inform them of a problem can only help keep Bogota a livable community. 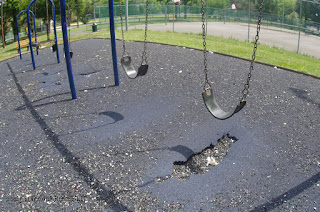 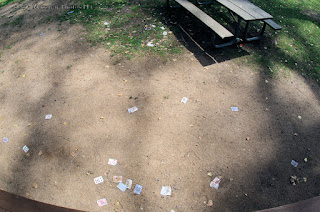 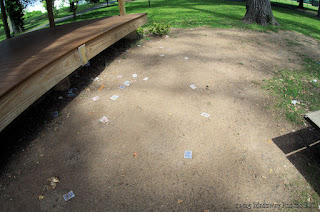 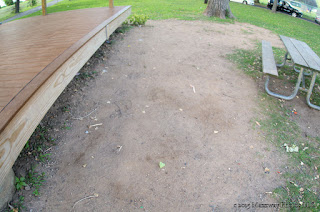 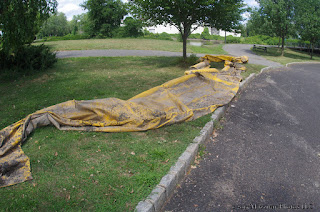 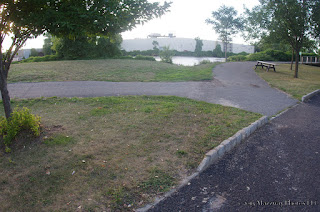