23-October-2016
On Saturday-22-October Bogota competed in the Bergen County Group  Championships at the Darlington Park race course. Both the Lady Bucs and the Men raced this season  in the Varsity "D" group. The Dady Bucs finished second out of the six teams running.  Angelie Jaipersaud was the top finisher for Bogota coming in sixth. Emma O'Brien followed her in seventh place. Alanah O'Brien  placed 11th , Gabrielle Grant 14th and Catherin Zapata 23rd for the scoring Lady Bucs.
In the Men's race Bogota swept the top five scoring placement. Danny Daurio became the Varsity "D" Champion with his first place finish. He was followed by  last season's Group "E" Champion James Draney, Ryan White, Cole Geraghty and Daniel Riveria. Jimmy Gutierrez finished 9th. Bogota scored the lowest points possible with 15 to win their 5th consecutive  Group  Championship  from the other eight school competing.
They will next compete in the Bergen County Meet of Champions  on Saturday 29-October at Darlington Park. 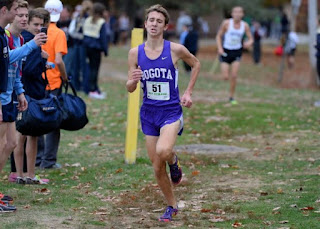