30-May-2021
On Sunday-30-May the Ridgefield Park Elks lodge #1506 held a dedication ceremony for their new Veteran’s Memorial.  This memorial is located just west for their front door facing Cedar St.  It consists of a stone circle, in the centre is a sculpture of a pair of empty combat boots, a downward facing rifle topped a helmet not to worn again. Facing the sculpture are members of all five branches of the United Stares Armed Services.  They form a crescent around the sculpture and saluting their fall comrade. Over looking the scene is a Bald Eagle. In front of the memorial is a paved patio with individual brick  engraved with the names of  people in remembrance.
Due to the weather condition the event was moved indoors to the Elks Lodge Main Hall.  That the entrance to the hall on table was set aside  with a single chair. This was the White Table. This is a symbol for and remembrance to service members fallen, missing, or held captive in the line of duty. Solitary and solemn, it is the table where no one will ever sit.
The ceremony was conducted by Mr. Ed Galas who led the attendance in the Pledge of Allegiance. This was followed by Mr. Rich Wardlow playing a solo version of the Star Spangled Banner.  Then Father Larry Evans from St. Frances’ Church reciting an opening prayer.  next Mr. Galas honoured the two people most responsible for the idea of, and the building of the memorial.  First was Ms. Laurie Southard who led the fundraising to finance the remembrance paving bricks. Then Ms. Linda Stallard for her work on raising the money for the memorial itself.
This was followed by a number of guest speakers.  The first was Mr. George Fosdick , long time Mayor of Ridgefield Park. Mr. Fosdick is also a Student of the history of the Second World War. With this background he used a quite from the Roman Senator Cicero who said: Poor is the nation that has no heroes, but poorer still is the nation that having heroes, fails to remember and honor them.  Mr. Fosdick continue in saying that he thanks the Elks in their creation of a memorial to the Woman and Men who gave their lives in service to the United States.  Other speakers included Mr. Dick Tabbachino, Mr.  Bob Binetti, and  Ms. Mary Ann Applegate. All talked about the importance of honouring former, future, and current members of the Armed Forces and Other Public service personal. And to remember  all who had lost their lives on their call of Duty.
Then a poem was read in explaining the White Table. The tablecloth is white, symbolizing the purity of their motives when answering the call to duty.  The black napkin, for the sorrow of captivity. The single red rose, displayed in a vase, reminds us of the life of each of the missing, by their loved ones and friends of these Americans who keep the faith, awaiting answers. The vase is tied with a red ribbon, symbol of our continued determination to account for our missing. A slice of lemon on the bread plate is to remind us of the bitter fate of those captured and missing in a foreign land. A pinch of salt symbolizes the tears endured by those missing and their families who seek answers. The glass is inverted, to symbolize their inability to share this meals toast. The chairs are empty because they are missing.
The ceremony ended with Mr. Rich Wardlow  slowly playing Taps
( To help support Bogota Blog NJ with it's coverage of Local stories & sports
please contribute at: donate to Bogota Blog NJ) 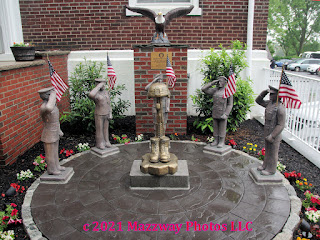 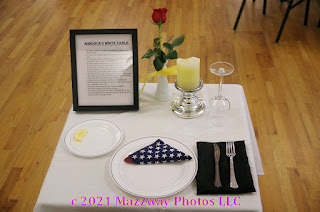 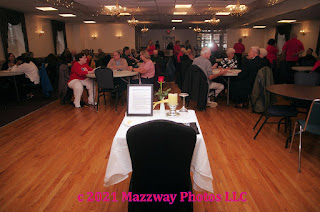 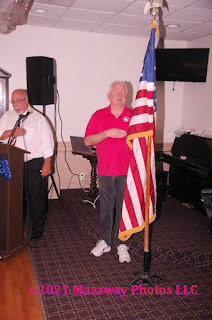 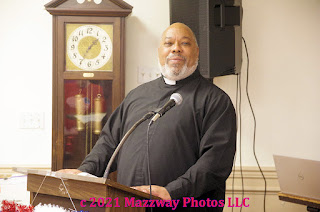 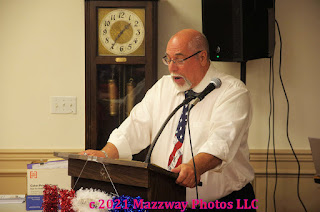 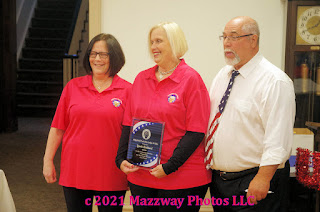 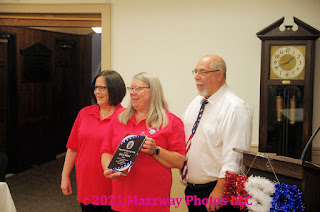 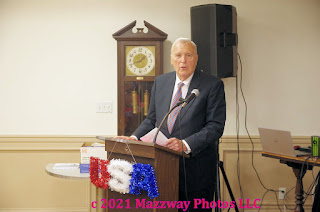 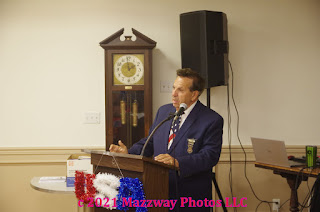 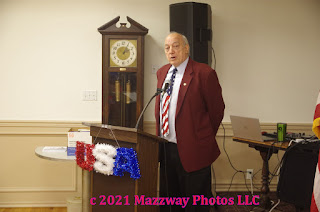 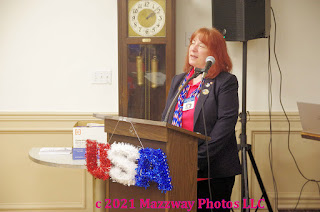 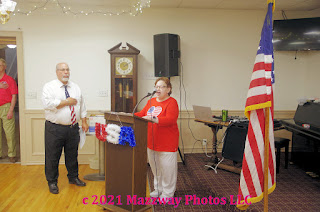 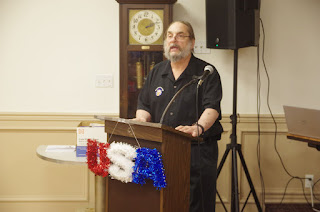