31-May-2021
On Monday-31-May the Bogota American Legion Post #117  and the Bogota VFW Post #5561 Memorial Day Remembrance Service.  Due to the lifting of health restrictions  this was able to take place as a public event. This was held on the steps of the Bogota Borough Hall To start the ceremony VFW member Al Hermann led the crowd in the Pledge of Allegiance. The opening invocation Pastor Jodi Wu of Bogart Memorial Church. Walter Croft Commander of the American Legion Post #11  was the first speaker to talk about the meaning of Memorial Day. He told the story of CTARNG SPC Cindy Marie Beaudoin, just 19 years old, from Connecticut who was killed by a landmine in Kuwait in 1991.  Another was a pair of brother from a Jewish family that fled to the United States before World War II had started. They enlisted in the US. Army  and were killed fighting to liberate their homeland in Europe. This was to remember soldiers who willing fought for the United States.  Next VFW Post #5561 Commander Alex Hernandez  talked about  remembering the people who had lost their lives during war time.  He asked everyone who have photos of Family members of before their Military service and remember how they were , and possible could have been , if they had not paid a ultimate price while defending the country.
The next to speak  was Bogota Mayor Chris Kelemen  who welcomed all who took the time on a Monday Morning to remember not only those from Bogota who have lost their lives on duty, the all members of the US Armed Forces who gave their lives for the nation.
Next Al Herman read a poem  called engraved in stone.  It talks about children playing  who then grew up to joined the Armed forces. Some returned home. While other have their craved in memorial like the one in front of Bogota Borough Hall.
The final two ceremonies were the reading of the names of service personal from Bogota who are now “absent”. After each name was read out loud, a poppy was place on a cross in front of the War Memorial in Borough Hall park. This was done by the VFW Auxiliary President Leslie Baker  who was assisted by Hailey Portugal, and Marianne Dispoto  the American Legion Auxiliary President with Emma Guiliano assisting. After the last flower was placed members of the Bogota High School Band played TAPS for the fallen Americans.  Next a wreath was place near the Memorial to those service personnel  who are Prisoners of War, or Missing  In Action.This was accompanied by a lone Bagpiper playing ‘Amazing Grace”
The ceremony ended with Pastor Lisa Holiday of Trinity  Lutheran Church, and  Deacon Kevin Regan of St. Joseph’s Church giving the closing Benediction.
( To help  support Bogota Blog NJ with it's coverage of Local stories & sports
please contribute  at: donate to Bogota Blog NJ ) 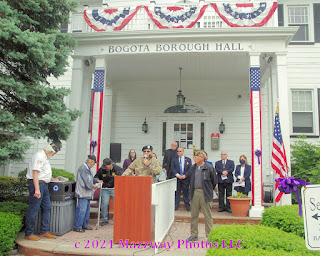 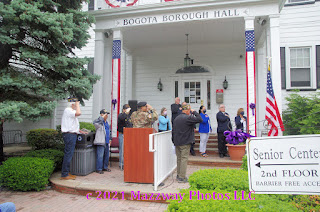 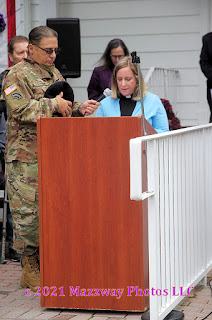 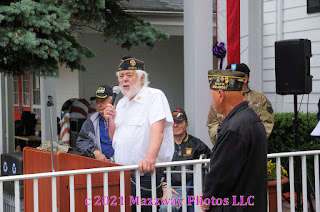 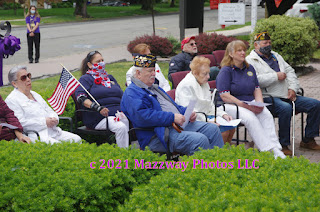 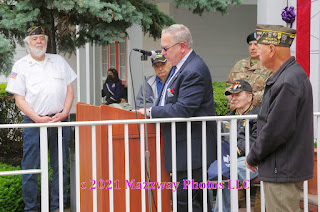 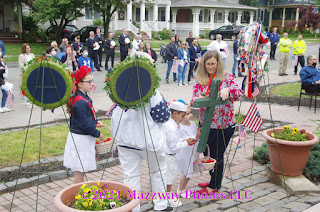 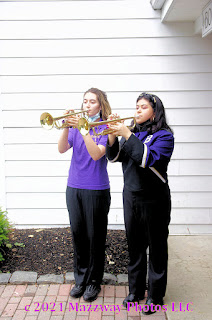 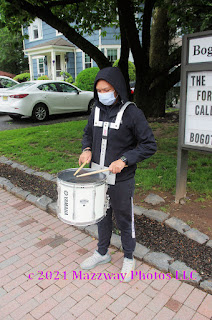 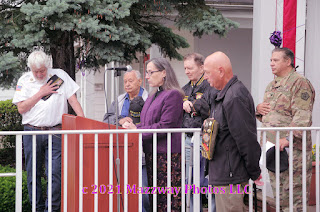 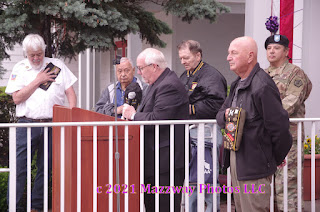 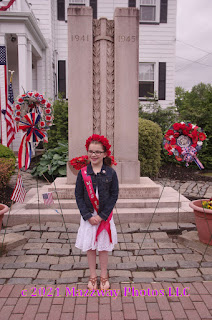 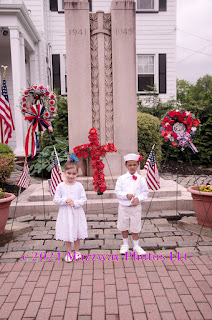