6-November-2021
On Friday-5-November the #4 seeded Ridgefield Park Football Scarlets hosted the #5 Lenape Valley Patriots in a Quarterfinal game of the NJSIAA North Jersey section 2 Group 2 playoffs. This was played at " THE PIT"  in the Biggs Stadium Football.  Lenape Valley would recieve the opening kick-off and move down the the Scarlets 4 yard line. The Ridgefield Park defense would hold the visitors off the scoreboard, including  stopping a fourth down and short yards to force the ball to be turned over on downs.  The Scarlets could not move away from their own goal and forced to punt. With the Patriots' in possession, the first 12 minutes would end tied at zero,
In the second quater Lenape Valley would strike first with a 27 yard pass from Keith Wagner to Jack LaVere. Mr. LaVere would race down the right side and cross into the endzone for the major score. Mason McClean would add the extra point and give the Patriots a 7-0 lead.
Ridgefield Park would respond with their own touchdown as Justin Meran  rushed 19 yards for the score. Andrew Vargas completed the play with his conversion to tie the game at 7 apiece.  The game would go into the half with the same score.
The third quater had only a single scoring play as Brevin Cooney found Jalexin Pimentel  for the touchdown. The Scarlets would go for the two point conversion from a wide formation. Andrew Vagas would take the snap and passed it to Giancarlo Martinez who stretched out to  register the extra two points. Ridgefield Park took their first lead of the game by a score of 15-7.
At the end of three quater time the score was the Scarlets 15 and the Patriots 7
The fourth quater saw the play open up. Lenape Valley score on a 46 yard pass play from Keith Wagner to Jack Pope. Their two point attempt was stopped when Kashawn Wallace intercepted the pass. With under four left  in the game the Patriots again move the ball deep into Ridgefield Park territory.  Eric Perez made a six yard run for the touchdown.  Keith Wagner then completed a pass to David Kraus for the two Point Conversion to make the score 21-15 in favor of Lenape Valley. The Scarlets would start their final drive near mid-field.  They would move into the offensive zone, but would also suffer some lost yards and penalties.  With under a minute remaining Ridgefield Park's Brevin Cooney sent a 35 yard pass into the endzone. Jalexin Pimentel  would be on the receiving end of this throw and cradled the ball in his arms for the touchdown. Then came a deciding extra point attempt. Andrew Vargas' kick made the score 22-21 for Ridgfield Park with under 40 seconds remaining.
With their time left Lenape Valley tried to move the ball into a scoring position. Just before the clock went to 0:00s Andrew Vargas intercepted the last pass of the game to give the Scarlets the 22-21 win.
Ridgefield Park's record is now 8-1. They next play  at #1 ranked Rutherford in a semifinal game on Friday-12-November. Kick-off is scheduled for 6:00p.
Ridgefield Park's Brevin Cooney had a game high with 192 Yards passing going 15 for 21 with two Touchdowns. The Patriots' Keith Wagner threw for 137 Yards going 6 for 9  with 2 Touchdowns with 1 Interception. Lenape Valley's Eric Perez led all players with 108 Yards rushing with one Touchdown. The Scarlets' Brevin Cooney ran for 80 Yards and Justin Meran scored one touchdown on the ground. Jalexin Pimentel  made 143 Yards receiving with one Touchdown. The Patriots'  David Kraus and Jack Pope each totaled 46 yards catching, while Mr. Pope and Jack LaVere each scored one in the air.
( To help  support Bogota Blog NJ with it's coverage of Local stories & sports
please contribute  at: donate to Bogota Blog NJ ) 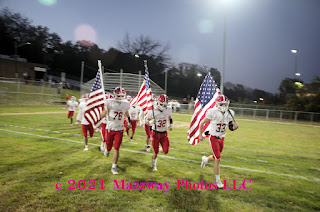 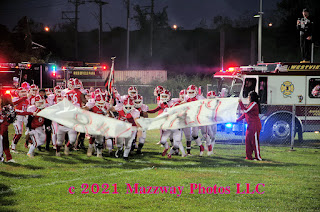 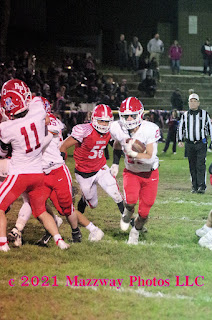 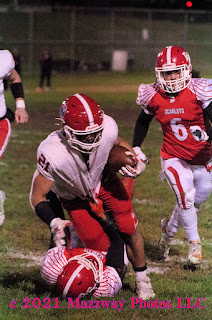 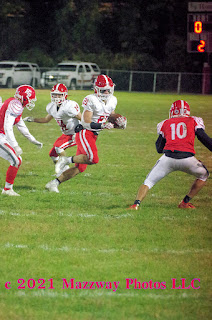 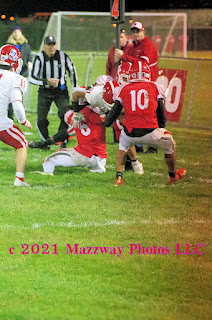 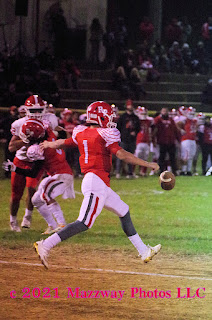 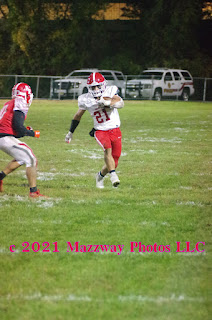 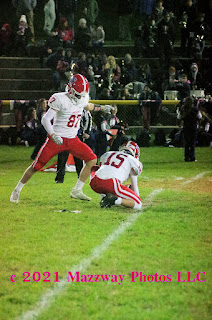 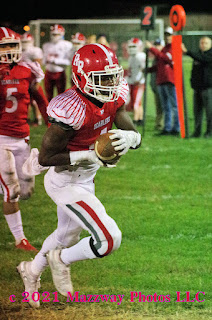 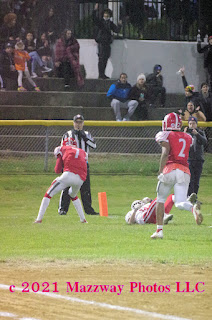 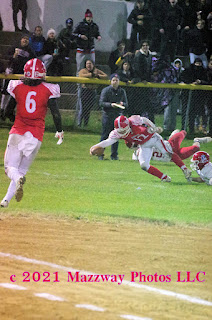 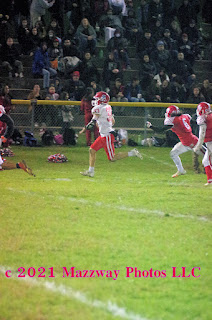 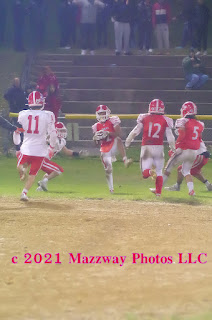 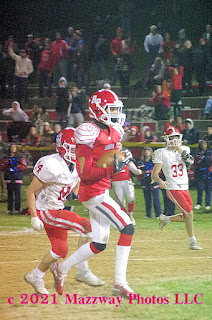 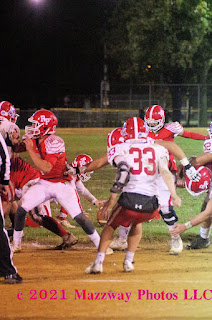