On Tuesday-7-December the Village of Ridgefield Park held their  annual Pearl Harbor remembrance observance in front of  the Veterans Memorial, Mt. Vernon Street & Euclid Avenue. The ceremony  began with VFW Post Commander Mr. Bob Carlson welcoming those in attendance. Mr Carlson then introduced Ridgefield Park Mayor Mr. John Anlian. Mayor Anlian talked about the need remember the events of that day, and how the nation came together to defend the County and the World in order to preserve Democracy.  Next Mr. Peter McElroy lead those in attendance with a prayer.
Then Former Mayor  Mr.George Fosdick talked about the ceremonies to remember  the attack on Pearl Harbor over the years. He added that the flag being flown over the Village's War Memorial is known as the "Pearl Harbor Flag" since is was presented to Ridgefield Park in recognition of the honouring the the Armed Forces personal, and citizens of Hawaii  killed, or injured that day.  This flag is only flown on four days: 7- December, 4th of July, Memorial Day and Veterans Day. Mr. Fosdick added that the flag was flown at Half Staff on this day to honour former United State Senator  Mr. Robert Dole.  Mr. Dole passed away earlier this week, and was a World War II Veteran who suffered handicapping injuries while serving the the Pacific Theatre.
Mr. Fosdick then played a recording of the Special News Bulletin announcing the Imperial Japanese Airforce  surprize attack on Pearl Harbor. This recording also included President Franklin Roosevelt's speech to Congress asking for a declaration of War against the Japanese Empire.
Commander Carlson ended the ceremony also honouring Mr. Dole 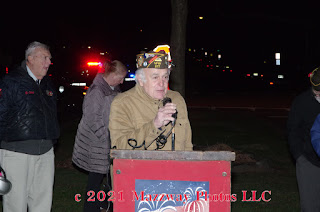 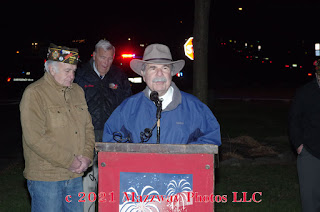 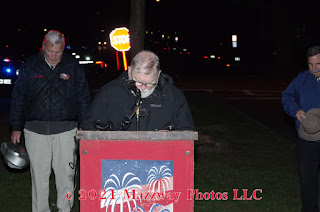 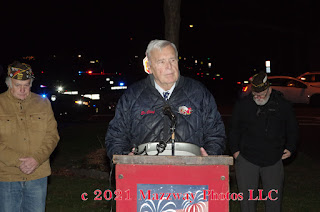 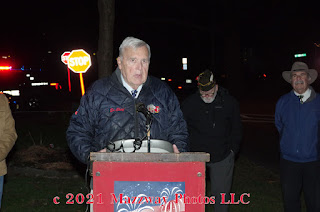