On Monday-20-August the Newlyweds who needed to be pulled out of their strained vehicle, by members of the Bogota Police Dept. returned to the Borough thank the officers and the Dept who came to their rescue.  Sabrina & Connor, after returning from their Honeymoon, traveled from their new home in Western New Jersey to meet the Officers in under calmer circumstances. Officer  Michael LaFerrera,  who help the occupants out of their vehicle, and Sgt. Geoffrey Cole, who guided the Police Hummer next to the wedding party, greeted the couple at the Bogota Police headquarters.  They took them on a brief tour of the Station and met with other Officers and Staff.  When asked what it felt like to be back in Bogota, they answered "Fortunately dry." They talked about the reason they headed into the Borough on that day. Originally they were suppose to go straight to the party after the wedding ceremony, but then took a detoured to allow for one of member of the party to change. The driver misjudge the depth of the water which cause the vehicle to stall out. Then the flood waters started to raise in a matter of minutes. Even after the Officers arrived the waters continued to rise at a faster rate than excepted.  This was one of the first times the Bogota Police had to use their new  Hummer to perform such a rescue.  This vehicle was recently given to the Police Dept. through  the federal program know as the Law Enforcement Support Office (LESO).  The Bogota Police intended to use this vehicle in just this type of situation. With the assistance of Officer LaFerrera the wedding party were carefully moved to the back of the Hummer and then driven to safety.  The force of the storm even send the Hummer to a mechanic to make sure there was no damage to the new vehicle.
The couple was aware of a third party was recording the recuse, but was do not know how it had spread across the internet until their Honeymoon. Since then they have returned to New Jersey and can look back on one of the more memorable Wedding Days, with only a small regret that the gifts for the bridal party was lost to the flood water.  They thanked the Officers one more time and returned to their new life. 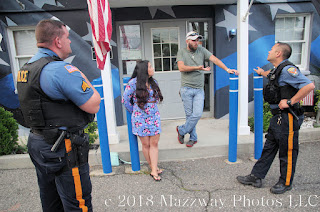 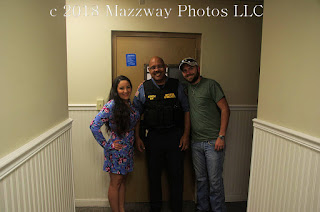 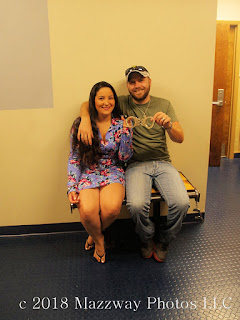 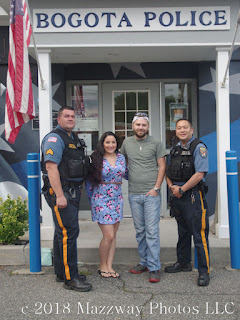