28-April-2021
On Tuesday-27-April the Bogota Board of Education held their second meeting for the month of April. At the start of the meeting  Superintendent Mr. Damien Kennedy presented the budget for the 2021-22 school year. Superintendent Kennedy explained some of the major factors that are part of the new budget.
He started with an overview of what the main points behind the budget figures. These were  Curriculum, Staffing, Capital Improvement, new Classroom Space, and Security.
Over all the School tax rate will increase by only 2%.
One of the major line items was the opening of class room space in the old St. Joseph’s School building.   This is being rented by the District, for at least 5 years, and will house the 6th and 7th grade Students.  This will then allow Bixby and Steen Schools to expand their Pre-School classes. Later in the meeting in was voted to appoint, current High School Vice Principal, Dr Erick Alfonso as Principal of  the new “Bogota Middle School” This new classroom building is being updated to become equal with the standards of the district other three buildings.  Along with the hiring of Facility and Staff for the “Bogota Middle School”.
System upgrades in all of the District schools include the replacing , and updating the current hardware in the classroom. This includes additional lap-tops and Smart boards in the classrooms. Also the installing of larger, and dedicated internet lines in all building. Stronger internet security software, and back-up systems.
Another key budget point was to raise the curriculum  standard for all grade levels.  these would include raising the proficiency in Kindergarten through Third grade to a goal of 90% in all grade levels. This will also include more proficiency in second languages for all grade levels.
An raising of learning standards in Math. This ties into the having Students becoming more proficient in reading aides in being more proficient in higher Mathematics. In Science the district will review their current programs the goal of making any needed improvement over the next two years. The Social Studies program will continue with the teaching and discussions of  diversity, inclusion and equity as part of the curriculum. The district is also planning the addition of topics such as Black American contributions during the Civil War and World War I & II. Women in STEM. Native American marginalization. Treatment of Jewish, Asian, and other minority groups. And  LGBTQ+ studies.
There will also be an expansion of  21st Century Life and Careers opportunities at the Middle School Level. The expansion  of Visual and Performing Arts classes and programs.  And Comprehensive Heath and Physical Education programs.
Physical infrastructure improvement are continuing. With the installation of more secure windows and doors in each building.  More and newer visual monitoring systems, and visitor management systems.  And communication system to allow contact with the Bogota Police Dept.
With the lose of some State funding, and the many programs being funded by Grants obtain  over the past year the district will have only a 2%  tax increase for the next fiscal year.
This budget was passed by the Board of Trustees by unanimous vote
In his report Superintendent Kennedy said that with a recent inspection of the boilers at the High School, their replacement may need to be moved forward by a year. He is in contact with County officials to get assistance in the replacement if needed.  Another item was that the newly hire Biology Teacher withdrew her acceptance of employment due to personal reasons.  Superintendent Kennedy is in contact with local Universities to see if any newly Graduating Student can be used to fill this void.  And that the Bogota High School has been ranked 165th out of over 400 other High Schools in New Jersey for their performance.  An information  letter to those Families with Students scheduled to move to the” new Bogota Middle School” will be sent out next week.
Later he added that the, with new health guide lines a Senior Prom and year end Award ceremonies are being planned. And the High School graduation is scheduled for Friday-18-June. With the Elementary Schools  proceeding on the Wednesday and Thursday of that week. No official information about attendance is available at this time, with more guidance for State and Local health official needed.
Then the Board Members  voted on the items of the consent agenda, and new items added for this meeting. All were passed by an unanimous vote. Items of note, along with the 2021-22 Budget, and the hiring of  Dr Erick Alfonso as Principal of  the new “Bogota Middle School”, The price for the school meal program remained stable.
The next Board of Education meeting will be on Tuesday-11-May and is scheduled to start at 7:00p. This will be a virtual meeting and is open to the public. Log-in information will follow.
For more information, or to view the 2021-22 Budget presentation please go their web-site at:  www.bogotaboe.com
Addition information about the District reopening plans can be found at: Bogota School re-opening 2020 ;  Bogota hybridvirtual-parent-portal
Along with information in both English and   GUÍA DE USUARIO - Español  at  https://www.bogotaboe.com/domain/423
( To help support Bogota Blog NJ with it's coverage of Local stories & sports
please contribute at: donate to Bogota Blog NJ) 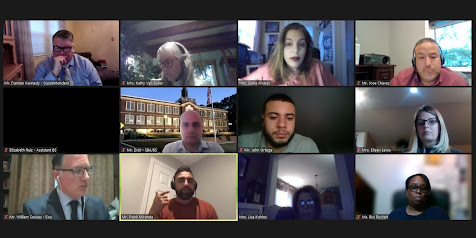