22-April-2021
On Tuesday-20-April the Bogota track and  Field Bucs opened their 2021 season at Midland Park. This was a tri-meet that had Bogota competing against Midland Park, and Hawthorne Christian Academy.
The Men's team would post wins against both opponents. They defeated Midland Park by a score of 73-49. And  Hawthorne Christian Academy by a score of 82-35. They now have a record of 2-0.
Individual winners were:
Jesus Michel 1st place in the 400m, 1600m, and 3200m races
Justin Cazar 1st place 200m race
Justin Cazar, Andreas Cabrera and Leandro Rojas swept in triple Jump
Dennis Toremis, Carlos Rondon, and Dylan Lemay  swept the long jump
Carlos Rondon  1st place High Jump
Bog 4x4 defeated MP

The Women's team won against Hawthorne Christian Academy  58-39. They would lose to Midland Park 31-80. Their record is now 1-1 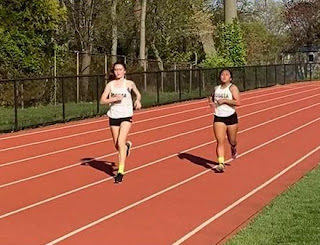