On Friday-23-April the Saddle Brook/ Bogota Baseball team hosted the Elmwood Park Crusaders. This will be played at the Sandle/Coolidge Baseball Field in Saddle Brook.
The home team would take control of the game in the bottom of the first inning by scoring 9 runs to start the game. They would double that score score by the end of the fourth inning.  Saddle Brook/ Bogota would the game  by a 18- 0 score in a five inning game. Saddle Brook/ Bogota record is now 3-0.  In the three games to open the 2021 season Saddle Brook/ Bogota  have out scored their opponents with a combined run total of 45-1. In the 15 innings that have been played Saddle Brook/ Bogota  pitching has given up only 5 hits
Saddle Brook/ Bogota's  Starting Pitcher Juan Carlos Castillo  would get credit for the win and record 4 Strike outs.  Ryan Ramirez and  Jonathan Pena came on in relief getting 2 and 3 more Strike Outs respectfully. Paul Figueroa would have a game high with 5 Runs Batted In.   Mr.Figueroa had 2 Home Runs. With Janiel Ortega and John Hacker adding solo shots.
Saddle Brook/ Bogota next play on Monday 26-April at Midland Park  Elmwood Park.  The First Pitch is scheduled for 4:00p
( To help support Bogota Blog NJ with it's coverage of Local stories & sports
please contribute at: donate to Bogota Blog NJ ) 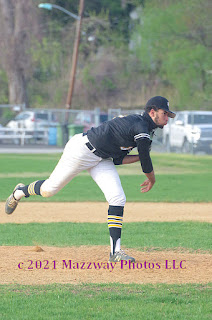