It has been official announced that Bogota Bucs High School All -American Basketball player Pat Sullivan has been signed to a contract as an assist Coach to the New York Knicks Basketball team. Mr. Sullivan is a Bogota High School graduate (class of 1990) where in four years of playing scored 2,546  points for the Bucs. He is still the all- time leader in scoring for Bogota. While in High School he was selected at a All League ans All County First team All Star three years in a row. All State  First team  All State twice and was named the All-American  team in 1990. He is the first Bogota Player to have his number retire, with his jersey hanging in Speary Gym. Mr. Sullivan was a member of the 1990 Bogota Men's Basketball Bucs Bergen County and group I championship teams.
After gradating from High School he attended the University of North Carolina, playing of three Final Four teams there. Including the 1993 NCAA Championship team. After College Mr. Sullivan has been an Assist Coach for the Detroit Pistons (twice).  also in New Jersey, Washington, and  formerly for the Los Angles Clippers.
Additional information can be found at: https://www.northjersey.com/story/sports/pat sullivan 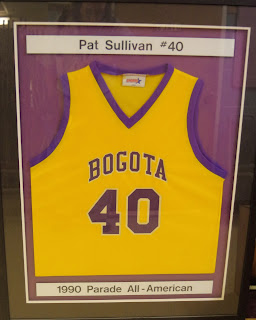