On Monday-27-May the Bogota American Legion Post #117  and the Bogota VFW Post #5561 Memorial Day Remembrance Service. This was held on the steps of the Bogota Borough Hall To start the ceremony VFW member Al Hermann led the crowd in the Pledge of Allegiance. The opening invocation Pastor Jodi Wu of Bogart Memorial Church. Next  VFW Commander Alex Hernandez speech talked about the a greeting for Memorial Day. He said that the reason for Memorial Day is to honour the members of the Armed Forces who have lost their lives in defense of the United States. The greeting of “Happy” to be included with Memorial is demising the loss of the Family and Friends being remembered this day. Commander Hernandez stressed that anyone wishing to exercise their rights to celebrate in their own way should be accepted.  Any leisure that occurs during the Memorial Day weekend is one of the rights the Woman  and Men of this country fought for.  Commander Hernandez asked that if anyone is greeted with “Happy Memorial Day” an appropriate  response is to add the phrase “ Because of a Veteran”.
The next to speak  was Bogota Mayor Chris Kelemen  who welcomed all who took the time on a Monday Morning to remember not only those from Bogota who have lost their lives on duty, the all members of the US Armed Forces who gave their lives for the nation. Mayor Kelemen also took the time to honour Walter Croft Commander of the American Legion Post #117, who for many years has been the organizer of this Ceremony and the Parade that follows. He presented  Commander Croft with a plaque from the Mayor and Borough Council.
This was followed by two Students from Bogota High School Christos Samouhos, and Carly Nunez who read their essays on the meaning of Memorial Day.  Another speaker was LTC Joseph Gagnon from the New Jersey National Guard. He addressed the audience to tell them the most recent citizen of New Jersey who have lost their lives while a member of the  New Jersey National Guard.
The final two ceremonies were the reading of the names of service personal from Bogota who are now “absent”. After each name was read out loud, a poppy was place on a cross in front of the War Memorial in Borough Hall park. This was done by the VFW Auxiliary  President Leslie Baker  who was assisted by Hailey Portugal, and Marianne Dispoto  the American Legion Auxiliary President with Emma Guiliano assisting. After the last flower was placed members of the Bogota High School Band played TAPS for the fallen Americans.  Next a wreath was place near the Memorial to those service personnel  who are Prisoners of War, or Missing  In Action. done by  Ms. Dispoto escorted by  LTC Gagnon This was accompanied by a lone Bagpiper playing ‘Amazing Grace”
The ceremony ended with Deacon Kevin Regan of St. Joseph’s Church giving the closing Benediction. 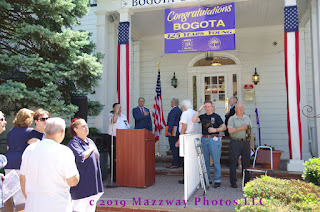 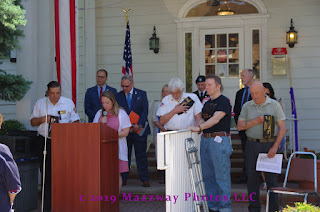 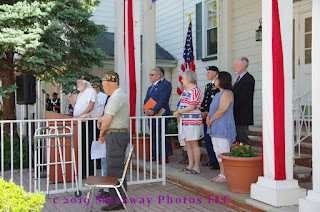 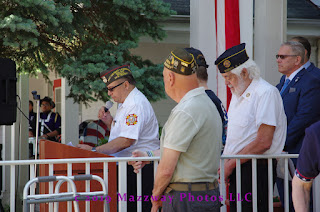 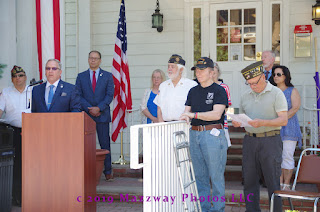 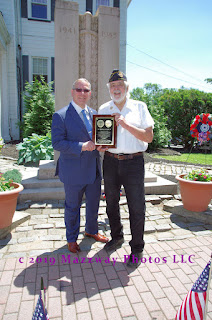 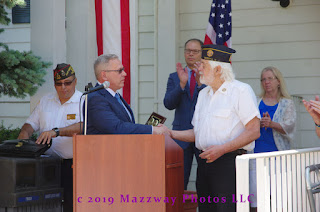 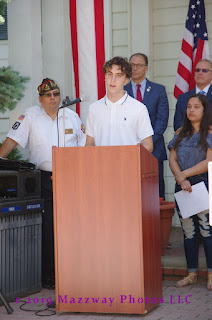 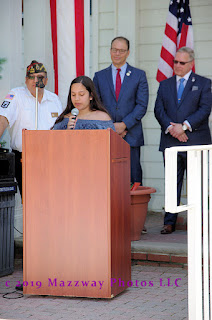 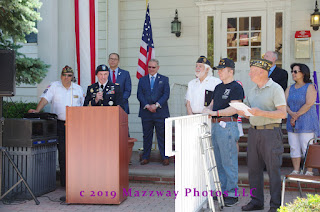 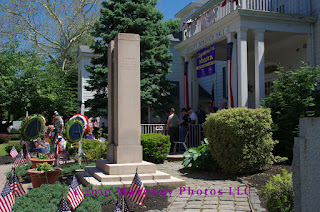 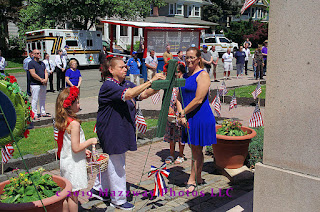 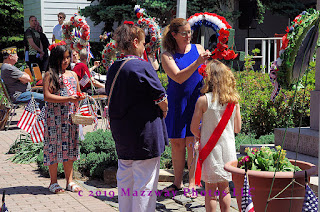 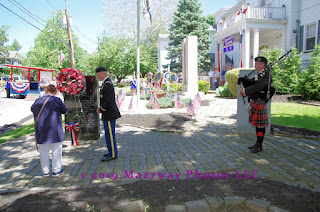 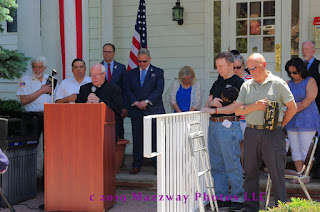