24-February-2021
On Tuesday-23-February the Bogota Board of Education held their second  meeting for the month of February.  In his Superintendent Report  Mr. Damian Kennedy answered one question from the Public Comment session earlier. This was to inform the Public that a number of the grant funding, that were on the consent agenda, will go to purchase books and other educational  material for the school libraries. Along with paying instructors for the Districts summer reading programs. Other items Mr. Kennedy mention was that on Monday-1-March he hopes to expand the in-class time for the Pre-School Students. This could include combining some of the group together to have more days of the week in the building. This, and a goal of opening all the building for in-person learning by March or April will be based on all Instructors and Staff being vaccinated.
Another point he made was the safety improvements made to all the building are continuing.  This includes re-enforcement film on the windows, adding the Visitor Screening software, and replacing the Doors in the High School. Mr. Kennedy also talked about that a limited number of Parents are now allowed to attend Home games at both the High School and Steen School for basketball. He finished his report in saying the School Districts in new jersey are still waiting on for guidelines about testing. As of now the testing is still on hold,but no firm plans have been announce.
Next the Trustees moved to the agenda items.  All the resolutions were passed by unanimous   vote. Some of the more noteworthy items were the approval of the purchasing agreement to install Solar Energy System on  all five District owned buildings. This included all three current school building, the Board of Education Office and the Field House at Fiegel Field. There will be a full report on this at the next Board Meeting.  Also of note was to accepted the resignation of Business Teacher Ms. Arlene Crugnola at the end of this current school year. Ms. Crugnola was first congratulated by Trustees Ms. Lisa Kohles, then by Trustee Mr. John Ortega. This was special for him as in Mr. Ortega was recently a former Student of Ms. Crugnola at the High School.
The next Board of Education meeting will be on Tuesday-9-March and is scheduled to start at 7:00p. This will be a virtual meeting and is open to the public.  Access information to be announced at a later date. Updates and announcements from the Bogota Board of Education will be available at:  www.bogotaboe.com
Addition information about the District reopening plans can be found at: Bogota School re-opening 2020 ;  Bogota hybridvirtual-parent-portal
Along with information in both English and   GUÍA DE USUARIO - Español  at  https://www.bogotaboe.com/domain/423
( To help support Bogota Blog NJ with it's coverage of Local stories & sports
please contribute at: donate to Bogota Blog NJ) 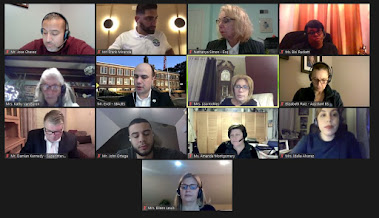