27-January-2022
Results of the Bogota Varsity sports teams from Wednesday-26-January.
The Bogota Bowling Bucs took on the Bergen Charter Bees at the Parkway Lanes in Elmwood Park, NJ. This was a makeup match from the one postponed earlier in the month. Bogota would win the match by a score of 7-0. Owen Rosado had a match high with a 236 game.  Franklin Linares had a 234 game, and Spencer Mazzella had a 202 game. Franklin Linares had a match with a 599 series. Bergen Charter was led by Emrullah Zorgun with a 195 game and series high of 506. Bogota's record is now 17-0. They next play on Thursday-27-January against New Milford. This will be at the Parkway Lanes in Elmwood Park, NJ with the first game scheduled for 4:00p.
The Bogota/Ridgefield Scarlet-Bucs Wrestling squad traveled to Rutherford to compete against the Bulldogs. Bogota/Ridgefield would win the first three bouts of the match. Two by Pinfall and on by Forfeit  and take an 18-0 lead.  The Bulldogs won the next three, one by Pinfall and two by Decision. This kept the Scarlets- Bucs ahead by the score of 18-14.  The two team would then trade Pinfall. Rutherford took their first lead of the match  26-24 with a Pinfall win. A Pinfall and a Major Decision win push Bogota/Ridgefield Park back ahead by 8 Points. A Pinfall by Rutherford, then a Decision win by the Scarlet-Bucs place the score at 37-32 in favor of the visitors. As the last bout, at 285 lbs, started Rutherford would need a pinfall to win the match.  The Bulldogs could only get a Decision win worth 3 points. This gave the Scarlet Bucs a 37-35 match win.
Of the 12 bouts that took place Bogota/Ridgefield  Park would win 6 of them. The Scarlet/Bucs Derek Baurnschmidt at 106 lbs, Anthony Landi at 113lbs, Adrian Laino at 144lbs, and Benjamin Rivera at 165  lbs all won by Pinfalls. Andrew Vargas at 175 lbs,would all score Major Decision. For Rutherford Vincent Keeler at 126 lbs, Anthony Bonagura at 157 lbs, and Chris Lora at 190 lbs all had PinFalls. Zach Herninko scored a Technical Fall
The Scarlet-Bucs' record is now 11-1. 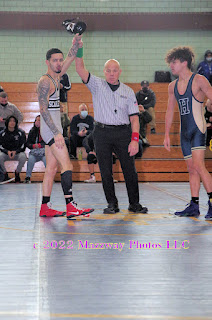 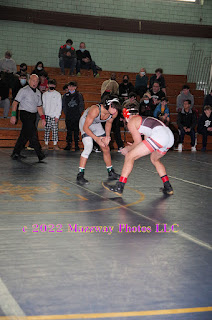 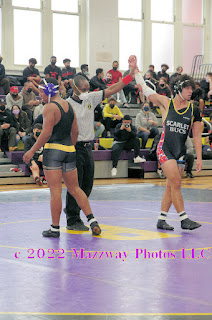 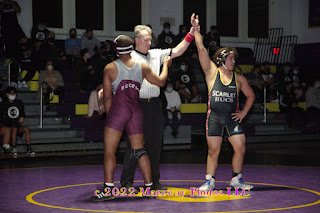