29-January-2022
On Friday-28-January the Basketball teams traveled to New Milford.  The Lady Bucs would play the Lady Knights in the first game. Bogota would start the game with a 9 to 7 lead after one quarter. By halftime New Milford took , and grew the lead to 23-18. After the restart the Lady Knights maintained their advantage and won the game by a score of 50-39. New Milford's Juliana Brophy  was the games top scorer with 14 points. Maryann Gesmundo had a team high with 12 Points for the Lady Bucs. Ms Gesmundo and the Lady Knights Bella Maniaho both had a game high with 3 Three Point Baskets
Bogota's record is now 4 -6. They next play on Monday-31-January when they travel to Park Ridge. The tip-off is scheduled for 4:00p.
The Men's Basketball Bucs also played the Knights in New Milford. At the start of the game Bogota's Evan Meberg had scored 945 Points in his varsity career.  Mr. Meberg would account for the first 5 points for the Bucs.  As the game would move on Bogota opened a 26-15 lead as the First Quarter end.  By half time the Bucs had a 50 to 21 advantage. Mr. Meberg put together a 31 Point first half. With in those totals he had 1 Three Point Basket along with 4  three point plays by converting his foul shot after scoring from the floor.  After the restart Mr. Meberg slowing kept adding to his points.  Midway into the third quater the Bogota bench would rise up with every attempt Evan made. A shot from beyond the arc was hoped to be the one to get to the mile stone. This failed to connect, but following his own shot Mr. Meberg scored point number 999.  About  30 seconds later Evan Meberg stole the ball at the top of the defensive key. He move down the court, cut to the centre and lofted the ball over the opposition and into the bottom of the net.  Bogota Coach Jay Mahoney  called a time out as Evans teammate rushed the court to congratulate him. Coach Mahoney then present Mr. Meberg a poster marking his accomplishment.
When the game continued and Evan would finished with a game and career high of 50 Points. Mr. Meberg is now 17th on the Bucs all time scoring list with 1,005 points. He trails Bryan Heron by two points.  New Milford was led by Anthony Giannoulis with 14 Points and a game hig of 4 Three Point Baskets. Jaden Feliz, Daniel Trinidad, and Vincent Ducut all has team highs of 2 Three Point baskets for the Bucs.
Bogota's record is now 6-7. Their next game is on Monday-31-January against Park Ridge. This will be played on the Jay Mahoney Court at Speary Gym, the tip-off time is scheduled for 6:00p
Select photos from the Bogota Blog NJ collection of Bogota Sports are now available for purchase. These may be order from the Bogota Blog NJ Zenfolio store at: Bogotablognj /Sports
(To help support Bogota Blog NJ with its coverage of Local stories & sports
please contribute at: donate to Bogota Blog NJ )
photos courtesy of New Milford Athletics 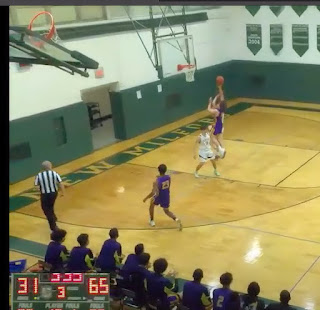 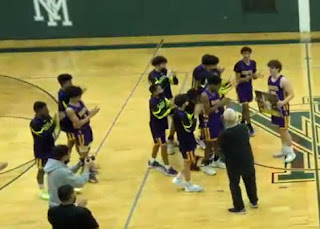 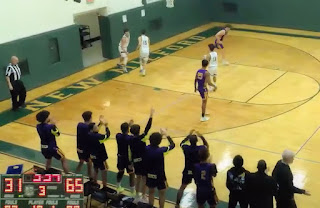 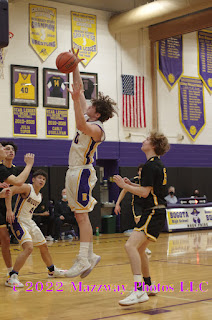 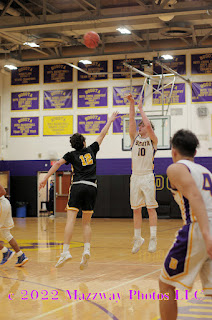 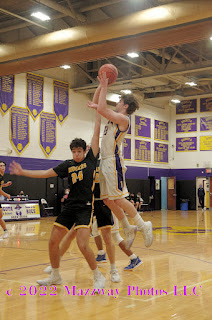