10-January-2022
Results of Bogota Varsity Sports from Monday-10-January.
The Bogota Bowling Bucs defeated the Saddle River Day School Rebels by a score of 7-0 at the Parkway Lane in Elmwood Park.  Franklin Linares had match highs with a 191 Game and a 551 series for Bogota.  John-Luca Haller led the Rebels with a 148 Game and a 357 series.
Bogota's record is now 11-0. The next play Park Ridge on Tuesday-11-January at the Parkway Lane in Elmwood Park. The first game is scheduled to start at 4:00p.
The Bogota Lady Bucs Basketball team traveled to Emerson to play the Lady Cavaliers.  Emerson would take an early lead and end the first quarter ahead 23-6. The home team would win the game by a score of 52-25. Emerson's Gia Mandile had a game high with 21 Points. Bogota was lead by Nakayia Fields with 15 Points. Victioria Sterinsky led all scorers with 3 Three Point Baskets for the Lady Cavaliers.
Bogota's recorded is now 2-1. They next play on Wednesday-12-January against Waldwick. This will be at home on the Jay Mahoney Court in Speary Gym. The tip-off is scheduled for 4:30p
The Men's Basketball Bucs hosted Emerson on the Jay Mahoney Court in Speary Gym.  The game started off as a tightly contested affair and stayed that way for over the 36 minute time span.  The Bucs would strike first on a Three Point basket, and Emerson  tied the game at 5 to 5. The lead changed with almost every other time the ball would travel through the netting.  By the end of the first quarter Bogota had a one point lead 14-13.
The second eight minutes mirrored the previous one with neither team unable to maintain a lead.  The largest gap in scoring could only grow to no more than 4 or 5 points. The Bucs  held a slight lead towards the end of the half 28-27. The Cavaliers then forces a couple of turnovers at mid-court and capitalized on both. Emerson would go into the locker  with a 31-28 advantage.
After the restart the guests stayed in front for most of the quarter. Bogota came within reach  and closed the margin to 49-51 by three quarter time.  The fourth session had Emerson take a  4 point lead, then the Bucs  went ahead by three.  As the clock moved to single digits the Cavaliers lead 71-68. Bogota's Evan Meberg let go a shot, from behind the arc, with just 7 seconds left. The ball when through the hoop at 6.2 left in regulation. Emerson could not break the tie before the buzzer and the game stood at 71-71 going into overtime.
Both teams would go into the extra session in the bonus foul shooting situation. Emerson took use of their chances go 8 out of 13 from the line. This, and holding the Bucs to one basket from the field, gave the Cavaliers an 83-76 win.
Bogota's Evan Meberg with 35 Points and Daniel Trinidad with 4 Three Points Baskets lead all scorers. Emerson's Khalid Itani with 29 Points and Jason Ziemba with 3 Three Point Baskets for their team.
Bogota's record is now 2-3. They next play on Wednesday-12-January at Waldwick. the tip-off is scheduled  for 7:00p
Select photos from the Bogota Blog NJ collection of Bogota Sports are now available for purchase.
These may be order from the Bogota Blog NJ Zenfolio store at: Bogotablognj /Sports
(To help support Bogota Blog NJ with its coverage of Local stories & sports
please contribute at: donate to Bogota Blog NJ ) 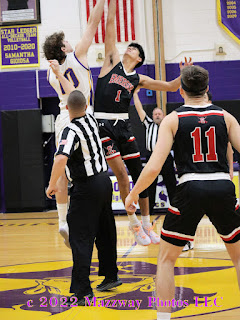 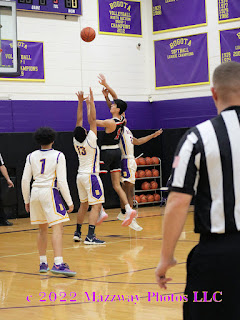 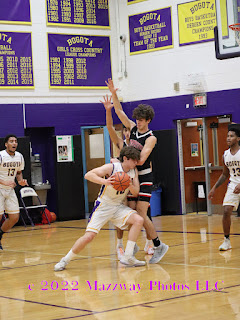 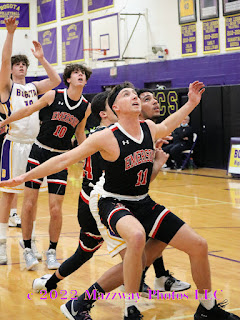 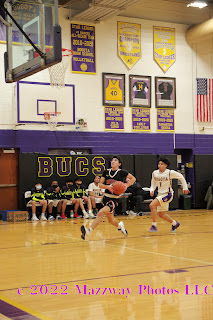 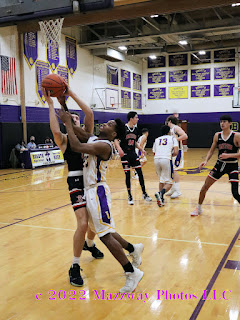 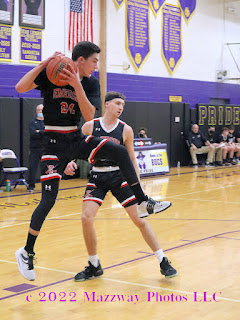 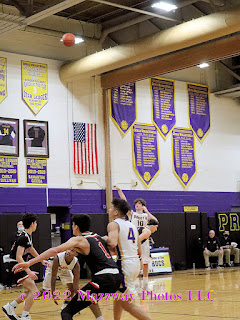 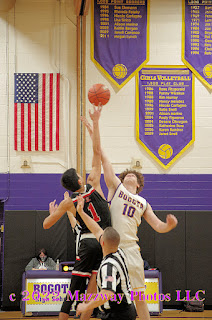