28-December-2019
Results from Holiday tournaments Varsity teams from Bogota competed in.
The first to play was the Men's Basketball Bucs at the 50th Garfield  Holiday Tournament. They would play the host Garfield Boilermakers in the opening round. The home team would start off fast and take a 12 point lead over Bogota in the first 8 minutes. Bogota would answer in the next quater and score 20 points of their own. This would give the Bucs a 30-29 lead at halftime. In the second part of the game would maintain their lead and win the game 58-49.  Bogota Taj Collins would lead all scores with 18 Points Garfield's Maxwell Drakeford would have a  high of 12 points for the Boilermakers. Evan Meberg and Vincent Ducut each had 2 Three Point baskets for Bogota.
On Friday-28-December Bogota would play the Mahwah Thunderbirds in the semifinal round.  A tight first have would see Mahwah take a two point in the first quarter 15-13, and Bogota cutting that to one by half time with the Thunderbirds leading 32-31. In the third quater Mahwah would double bogota's point total  and go on to win the game  55-48. Taj Collins would have a game high with 17 points. Nick Peltekian led Mahwah with 16 Points. Mr. Collins, and  Evan Meberg would each have 3 Three Point baskets for Bogota.
Bogota will now face Westwood in the consolation game on Sunday-29-December at Garfield High School.
The Bogota Lady Bucs play in the  Weehawken Indian Christmas Classic. Bogota would play the Lady Tigers from Memorial of West New York in the opening round.  Memorial would win the game by the score of 45-18. The Lady Bucs will now play Hoboken in the consolation game on Saturday-28-December at Weehawken High School
The Bogota-Ridgefield Park Scarlet/Bucs  wrestling squad would compete on Friday-27-December in the Bergen County Coaches Association Tournament at Hackensack High School.  Bogota-Ridgefield Park would have four wrestler competing. In the round of 32 Gabe Nunez at 132 lbs would be defeated by Jonathon Cherba from Paramus by Mayor Decision. And Kevin Flores at 182 lbs lost to Alex Castillo of Dumont by Mayor Decision.
In the round of 16 Adam Albino at 113 lbs would lose a Decision to Patrick Cahill from Pascack Hills. Andre Ruiz at 126 lbs would win, by Technical Fall, over Harrison Chin of Ramsey.  Mr Ruiz move to the quarterfinal round and score a  Technical Fall over Joseph Bussinelli from Ridgewood. Andre Ruiz now competes in the Semifinal round on Saturday-28-December with the bouts starting at 10:00a at Hackensack High School. 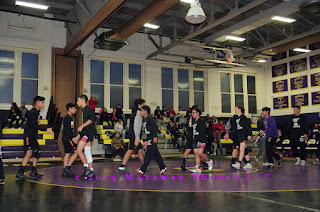 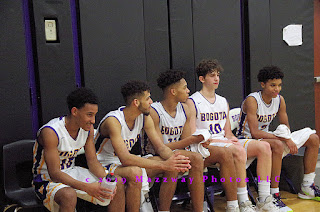